Daimler Truck AG’s BharatBenz brand is an industrial vehicle line tailor-made for the Indian market. Chennai, in the country’s south, is where automobiles are manufactured. The production of trucks and buses began on the same day in June 2012 and 2015, respectively.

For decades, both Daimler and its precursor Daimler-Benz have supplied the Indian market with commercial cars. However, in Germany, where cars are mainly produced, they are seen as high-tech items that can only be sold in limited quantities due to the unique nature of the business. Since the commercial vehicle market in India is expanding rapidly, the company decided on April 5, 2006, to focus on making trucks and buses for that country. Daimler first sought a reliable local collaborator. The manufacturing of commercial vehicles was established in 2008 as part of a joint venture with the Indian company Hero Honda Motors, one of the biggest motorbike manufacturers in the world. Surprisingly, though, this contract was terminated once again in 2009.

Daimler India, a producer of the BharatBenz line, took home the Apollo CV Award, granted annually by the top Indian commercial vehicle magazine, at the start of 2014. Tata’s technically outmoded models still control most of the Indian truck market. Thus this prize is significant for the firm.

In 2015, output reached 14,000 units, and buses were manufactured. It is not uncommon for automobiles built in Chennai to be exported to chosen countries in Africa, Asia, and Latin America, where they are marketed under the Fuso brand.

Vehicles in this line include medium- and heavy-duty trucks and other specialty vehicles, including dump trucks and tractor units. Vehicles are up to par with India’s Bharat Stage 4 (BS 4) emission standard, which is equivalent to Europe’s older Euro IV level.

BharatBenz’s Heavy-Duty Haulage 1617, 2523, 3123, and 3723 are equivalent to the discontinued Mercedes-Benz Axor series in Germany regarding the driver’s cab and engine. They may have anywhere from two to five axles and a total legal weight between 16 and 37 tons and come with a wide variety of body configurations or none. Stronger axles and a more sturdy ladder structure have been added to meet local regulations. The 3123 series is powered by a six-cylinder in-line engine that can provide either 170 or 205 kilowatts of power thanks to pumping nozzle direct injection (230 or 280 hp). The automobiles equipped with this engine are superior to the norm in the nation. There is a modest but roomy foldable bed in the driver’s cab, especially compared to the area’s competition.

Vehicles with the Medium-Duty Haulage 914 and 1214 designations are lighter versions of the Mitsubishi Fuso Canter and Fuso Fighter, respectively. Although the public bodies have GVWs ranging from 9.6 to 15 tons, the components were developed with a greater load capacity in mind.

Two-, three-, and four-axle dump trucks are available in gross vehicle weight ranges from 11 to 31 t. A limited-slip differential is installed on the driving rear axles. The Model 1217 (13 t) dump truck, the world’s lightest, was recognized as the Commercial Vehicle Innovation of the Year in 2013. It is well recognized as the first dump truck produced in India at this weight.

Tractor units with two or three axles may generate up to 205 kW of power and are built on the same Mercedes-Benz Axor chassis. The maximum allowable semi-trailer weight is 40 or 49 t, depending on the model. 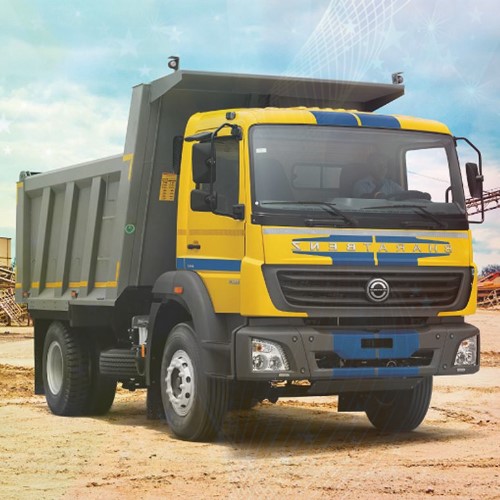 Accessible coach and school bus production began in 2015. The bodywork is put together in collaboration with the Northern Irish bus maker Wrightbus.

The alliteration of BharatBenz is considered a marketing concept in the business press that looks more Indian than the names of local manufacturers like Ashok Leyland. In addition, several Indian languages refer to India as Bharat.