Loaders are used everywhere. They found special applications in small construction and agriculture areas, not counting the main loading and unloading work they are intended for. The most famous can be considered the telescopic loaders of Caterpillar, produced by the well-known American corporation that has existed since 1925.

Caterpillar is equipped with a full drive and full-controlled base, distinguished by maneuverability and cross-country ability used on sites with limited action conditions. Particular maneuverability determines the possibility of crab movement thanks to separately controlled wheels. Caterpillar frontal telescopic loader is equipped with a 13-meter arrow, on which you can install a pitchfork or bucket if desired, while the carrying capacity remains in the region of 3 tons.

After installing the bucket, the Caterpillar telescopic loader turns into a small excavator suitable for performing a wide range of land work. Various buckets, lifting sites, and forks, allow you to change the focus of the work performed by the loader within 10-15 minutes. A quick change in attachment equipment significantly saves time and eliminates the need to change equipment.

Both large and mini telescopic loaders with capture are equipped with a locking system on a chain transmission of a lift, reliably holding the load in the raised position while driving through the crossed terrain, causing the shaking of the machine.

Drive and hydraulics in the Caterpillar telehandlers

Caterpillar TH336 loaders are equipped with a diesel engine with a turbine that develops a power of up to 102 horsepower. In addition, the liquid cooling system provides continuous operation in almost all climatic conditions, even in areas with a strong level of dust.

A special two-component hydraulic system is installed on the CAT loader. Telescopic loaders of this level are equipped with a system with variable flows, on the main hydraulic system up to 106 and on the auxiliary system up to 60 liters per minute. In this case, constant pressure of 250 bar is preserved. In addition, the hydraulic oil supply system is equipped with a separate cooling radiator. And all hydraulic hoses are reinforced and able to withstand pressure several times more nominal. 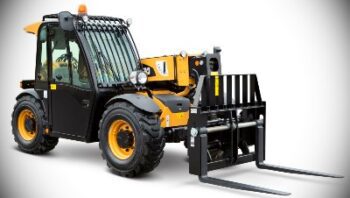 The Caterpillar TH336 loader arrow mechanism uses its own independent pump, supplemented by a fuse, excluding the possibility of spontaneous lowering of the boom. In addition, for most of the models, the engine is not behind the operator but on the side and has an additional switch that turns off the transmission when operating only the hydraulic parts of the machine. This significantly reduces fuel consumption, which, in other loaders, goes to maintain idle.

Wheelbase and cabin of Caterpillar operator

Caterpillar telescopic loaders use a hydromechanical transmission with gear shifts under load to ensure maneuverability and sustainable movement. The front wheelbase in Caterpillar TH580b and other models is equipped with a swinging blocking suspension for stability at the time of work. The hydraulic stop system is based on cooled disc brakes.

Like most of the models of this manufacturer, a completely sealed cabin is installed on the Caterpillar TH103, with a pre-installed heater and air conditioning for working in the warm and cold seasons. In a loader with a telescopic arrow, there is only one joystick responsible for driving an arrow of the machine. All other functions are controlled by a button console and emergency alignment of the frame in the event of a roll of a machine.

Even though a conventional steering wheel controls the machine, the combination of commands allows the Caterpillar TH340 B loader to turn almost in place only with front or rear wheels, as well as unfold all four wheels in one direction using crabs move.