The Kenworth T2000 is a classic American long-haul truck with an intelligent, modern design and economy. For 25 years of sales, the main tractor has not lost its relevance and continues to travel not only on the roads of the United States but also in many other countries.

The history of Kenworth began in 1923. Its creators were two entrepreneurs from the USA – E. Worthington and G. Kent. The production of trucks immediately started at the plant, and already in 1924, more than 80 vehicles with a small carrying capacity were built and sold.

In the future, the company released many models, and in 1985 the first heavy cargo tractor, T600A, appeared, which is often called the “anteater” because of the unique shape of the hood. However, technology did not stand still, and the manufacturer improved this series of vehicles and, in 1996, released the Kenworth T2000. The company claims that they have been working on creating equipment for several decades, and the most insignificant nuances were taken into account.

In the creation process, the developers set the task of increasing the level of safety of the driver of the tractor itself and other road users. At the same time, cameras were installed in the cockpit to improve visibility when moving in different directions, and video cameras appeared with the option of night vision, etc.

The manufacturer’s specialists managed to lighten the tractor as much as possible by combining the cabin and the resting place and using special materials. So, in the manufacture of the frame, aluminum chips were used, and in the creation of panels and the roof, sheet SMC polymer was used. An additional plus was manufacturing many suspension components, fuel tanks, and other elements from aluminum.

The American tractor is produced on a 6×4 chassis in 2 versions with a distance from the extreme part of the cab to the end of the car of 2.845 or 3.048 meters. The machine is equipped with powerful engines ranging from 11 to 15.6 liters with a capacity of 280 to 600 horsepower. In addition, trucks are equipped with modern security systems and have lower fuel consumption.

Particular attention is paid to the Kenworth T2000 cabin, which has become more comfortable and increased in volume. It has completely changed the interior and technical equipment. You can buy a version with a shortened cab and a lower roof if desired. An interesting novelty is the use of fiberglass springs and pneumatic elements.

Design features allow the Kenworth T2000 to be used for transporting various types of cargo over long distances. This possibility is due to the presence of a comfortable cabin and a comfortable place to rest while traveling. 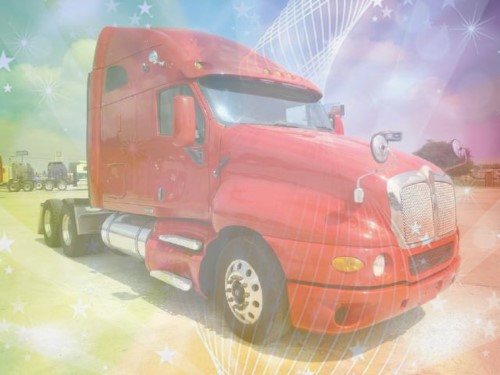 The American truck stands out not only for its lightweight design, stylish appearance, and fuel economy but also for its unique technical characteristics. Basic parameters:

The American manufacturer equips tractors with only high-quality motors. The most popular is the power unit from the Caterpillar C15, and the most common modifications of diesel units are 12.5 and 15 liters with a capacity of 430 or 475 horsepower, respectively.

Most often, 6-cylinder units are installed on the Kenworth T2000, distinguished by intermediate cooling and providing fuel economy even when driving at high speed. In addition, during the operation of this motor, the most negligible harmful emissions enter the environment.

Basic characteristics of a 15-liter engine:

Kenworth T2000 Truck has a dependent front and rear suspension, many elements of which are made of aluminum. Of particular interest is the 8-balloon air suspension type AirGlide. Here, the drive axles are kept from shifting with the help of a V-shaped transverse link and two lower jet rods combined into a standard block with stabilizers.

According to the developers, unlike the classic semi-spring suspension, the applied option increases the degree of the wheels’ grip on the road and the level of comfort. At the same time, the loads on the various suspension elements are reduced, and the alignment of the axles is maintained, guaranteeing a long service life for the frogs.

The air suspension can withstand a load of up to 16.3 tons, making it possible to use the tractor as a road train with a total weight of up to 63 tons. In addition, the manufacturer also offers 8- or 12-balloon suspension type AG 460 / 690, respectively. In the latter case, three axles are provided, capable of withstanding a weight of up to 31 tons, and the total mass of the road train can reach 63.4 tons.