Peterbilt 379 – North American 6×4 long haul tractors produced between 1987 and 2007. Peterbilt 379 is a classic model of a truck tractor, which has become the primary basis for the development of subsequent series of the brand. The Peterbilt 379 series is implemented on the upgraded chassis of the Kenworth W900L. The main changes were made due to the new design of the rear axles and the use of a narrower track of the front wheels, which was frankly lacking from the donor from Kenworth. The positive side of the Peterbilt 379 is that this car has a significantly reduced turning radius, despite the increased length of the wheelbase. The top speed has also increased, thanks to increased gear ratios in line with tractive effort. The Peterbilt 379 Series is available in two cab options, standard and extended bonnet, for use with standard and oversized engines, rated and overpowered. 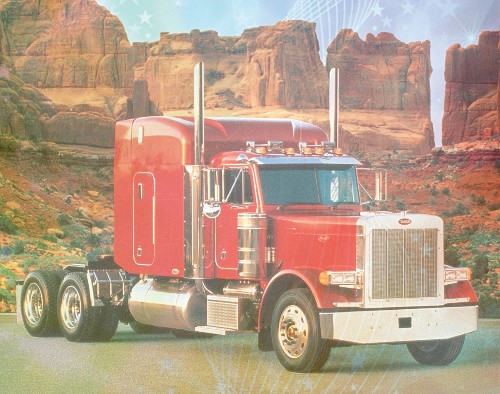 Trucks Peterbilt 379 enjoyed wide popularity in the United States. These cars are distinguished by high reliability and workmanship in general. The Peterbilt 379 was powered by Caterpillar or Detroit Diesel powertrains. The main feature of all Peterbilt 379s since 1995 is that all these cars are built to order, and it is almost impossible to find two identical trucks.