The super heavy truck Berliet T100 was created in 1957 in France to work in the oil fields of Africa. At that time it was the biggest truck in the world.

Three-axle full-bodied Berliet T100 equipped with a 12-cylinder turbo diesel Cummins capacity of 600 liters. from. and a four-speed automatic transmission. The car with a cargo platform for cargo transportation had a total mass of 100 tons.

In 1958, the company Berliet built a second machine, which received an engine capacity of 700 liters. from. And the third sample of the truck received a dump body, but lost the full drive (wheel formula 6 × 4) and the “automatic” (it was replaced by a mechanical box). The total weight of the truck was 155 tons. 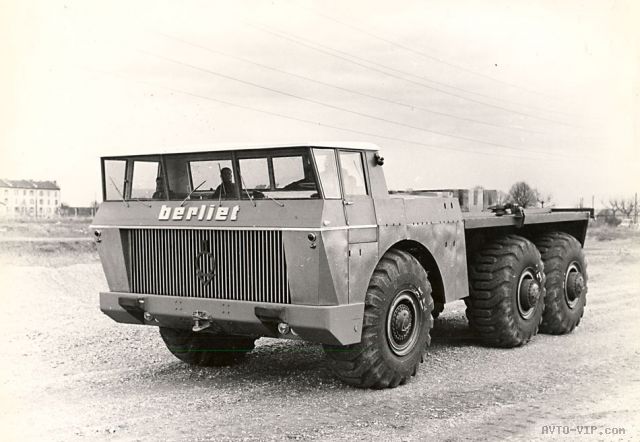 The last and fourth copy of the Berliet T100 was produced in 1959 for America. A four-wheel drive truck with a gross mass of 100 tons was distinguished by a cab-free cabin.

Such heavy machines were not very convenient in practice and were soon decommissioned. Two trucks were cut for scrap metal, one remained in Algeria as a monument, another one is stored in the factory museum of Renault Trucks.