Also, the technique is divided by the type of arrow design-loaders with a Z-shaped arrow structure and loaders with an arrow parallelogram structure. The XT index indicates the latter. In addition, some models have an elongated arrow and increased unloading height.

All equipment comprises CASE, Cummins, or Deutz diesel engines, 40-250 kW. Cummins diesel engines are installed on the most influential models, such as 1221s and 1221e XR.

On the front loaders, the function of the bucket stabilization system when moving the Ride Control is to provide the movement with two leading bridges with a self-locking differential.

There are means of automatic switching to the modes of movement, excavation of soil, installation of a floating position, or working height of the bucket.

CASE frontal loaders are characterized by a wide-angle system of steering with hydraulic power, which has no consequences on corrective steering turns during maneuvering. Therefore, the movement of technology remains smooth even at high speed. It is also facilitated by the execution of turns between the stops of machine.

The ECM unit switches the speed of movement and the machine’s load in automatic mode to the maximum possible transmission.

The programmable effect of the ESM unit smoothly changes the speed of movement in each speed range, while there are no shocks when switching gears, and the need to discard gas is excluded.

On the front and rear axles of some models of frontal loaders, a differential with a slip of the slip is installed. 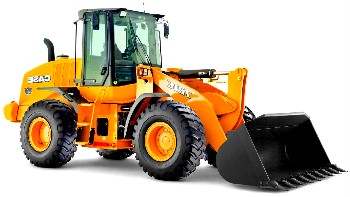