Designers Henry Ford offered the first prototype of a tractor with an internal combustion engine in 1907, but on the wave of Ford T’s success this design remained unclaimed. Henry Ford returned to the tractor theme in 1915, exhibiting a prototype at the Michigan exhibition. Minority shareholders, who owned 41.5% of Ford Motor Company at that time, severely blocked any diversion of funds for experiments with tractors, so in 1916 Ford and his son Edsel, as individuals, organized an independent company Henry Ford and Son – Henry Ford and son. Its products carried a new brand, Fordson.

The first large order was received in May 1917, even before the deployment of production. The UK government, concerned about the food crisis of wartime, organized the plowing of wasteland and agreed with Ford on the delivery of 5,000 cars at a cost of “cost plus $ 50.” After the end of the First World War, the shipyard of Ford, which had previously produced anti-submarine ships, was converted into a production of tractors. In the first half of 1919, Ford bought out the shares of former companions, and the tractor production received access to all the resources of the Ford Motor Company. Then Ford laid the assembly plant in Cork (Ireland), who worked until 1932. 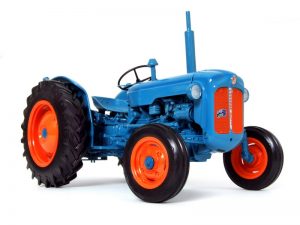 The same as in the case of Ford T, in agriculture, Ford put on a single mass, cheap model. Fordson with metal wheels, a 20-horsepower engine and a mass of 1130 kg, which in 1918 cost 880 dollars, was reduced in 1921 to 625, and in 1922 to 395 dollars. Tractors were sold through Ford’s auto sales network, which reached the most backward agricultural regions of the country. In the first half of the 1920s, demand exceeded production capacity (only twice, in 1923 and 1925, output exceeded 100,000 units per year), but the tractor business remained unprofitable. Ford, which had 35% of the US agricultural market, eventually lost the competition to Caterpillar, John Deere and International Harvester: successful, solvent farms selected specialized machines that meet the needs of their production.

In 1928, Ford closed tractor production in the United States. Irish production in 1932-1933 moved to the eastern outskirts of London, where he worked under the brand Fordson until 1964, and then changed the sign to just Ford.