Trucks of the International 4000 series occupy a special place in the systems of vehicles that are produced by the manufacturer. First introduced at the end of 1988, the 4000 series was quickly able to achieve recognition and gain special prestige in the American truck market. These trucks, by their properties, are equally well suited for both urban and heavy road operating conditions. International 4000 trucks are fitted with various technological and special equipment.

Two-axle trucks of this series, which received their designation 4700, are equipped with diesel engines of their own production 444E or DT466 whose power ranges from 175 to 250 horsepower. These vehicles are equipped with a manual transmission with 5 steps from Spicer or an automatic transmission from Allison with four steps, cars are equipped with Sheppard power steering, driving and not driving, controlled axles from Rockwell, Eaton, Dana.

In this brand, brake mechanisms, as in other brothers, are disc brakes on all wheels from the manufacturer Bendix. The list of equipment already available on this truck is supplemented by six and ten-speed manual gearboxes from Spicer or Fuller, but already seven and nine-speed units of our own production, five and six-speed automatic transmissions from Allison can also be installed. In addition to all this, the brake system of the car is equipped with ABS at the request of the customer.

But the suspension of the car, like other brothers in the plant, is spring, but at the request of the customer, the car can be equipped with special pneumatic cylinders. Cabins are of different types in size – from 2446 to 2570 millimeters, but they are all made of ordinary carbon steel, but the integral plumage of cars is made of FRP grade fiberglass. At the request of customers, the cab of the car can be made six-seater with two or four doors.

Such special cabins are equipped with cars of the 4700 LP and 4700 LPX modifications with a very peculiar spectacular appearance both outside and inside. These modifications are main truck tractors, which are mainly used to transport residential compartments, which are installed on semi-trailers. Modification of the Intarnational 4700 Lo-Profile car is equipped with a special frame and suspension during assembly in order to reduce the distance from the bottom of the body to the road surface to 610 millimeters, and at the same time facilitate handling.

Two-axle vehicles with the index 4800 have a 4×4 all-wheel drive, a Dana front axle, and have a slightly higher ground clearance compared to the 4700 modification. These truck modifications are used not only on public roads, but on unpaved roads, and of course off-road. The engine is installed on the car of native production, the power of which is from 175 to 250 horsepower, the wheelbase is 3556–5337 millimeters, the gross vehicle weight is from 12 to 16.8 tons.

Installation on the car of a two-row cabin is also provided. From the 4000 modification, the 4900 series trucks find an even wider scope, this modification is equipped with International DT466E diesel engines whose power is from 195 to 250 horsepower, and the 530E modification engine with power from 250 to 300 horsepower is also installed. Manual transmissions that are installed on a car are from five to ten steps, but automatic transmissions are from four to six steps. 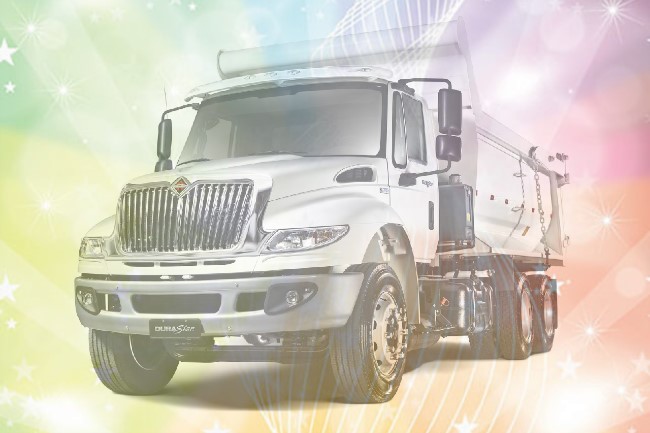 The cab of International DuraStar trucks is fitted with air suspension, which softens the passage of bumps on the roads. The International DuraStar power unit is positioned beneath the cab. The 6.4-liter Maxxforce 7 engine produces 300 horsepower. MaxxForce power units excel in three important areas: cost effectiveness, efficiency, and serviceability.