Trucks of the 8000 series produced by International are similar to their younger, lighter counterparts of the 4000 family, identical to the 8100 and 8200 models. True, the older brothers of the 8,000, except for long-haul transportation, do nothing else. The manufacturer equips all this family division’s cars with two- and three-axle axles. They are also equipped with aerodynamic devices that have properties that reduce air resistance, and they are also equipped with sleeping compartments of various sizes and internal filling.

Trunk tractors with an index of 8000, both two- and three-axle, operating over relatively short distances, such vehicles are mainly equipped with engines of their production, the power of such machines is from 195 to 300 horsepower, they can also be equipped with Cummins, Detroit Diesel and Caterpillar diesel units, which develop strength from about 250 to 370 horsepower. For this model, the power plant’s capacity determines only when the total mass of the road train, which when using a car with a 4×2 wheel formula reaches 27.2 tons, and with a 6×4 wheel formula – 36.3 tons.

Gearboxes that transmit traction to the drive axles are installed mechanical at nine and ten-speed. The manufacturers of these gearboxes are Fuller or Spicer. The chassis of these models, or the suspension of driving and non-driving axles, is spring-loaded. The customer can ask to install pneumatic cylinders for the rear axles on the car. Disc brakes are installed, and others can be used at the customer’s request. Almost the only one that can be called a branded accessory is a set of spoilers to improve aerodynamic functions that enhance the streamlining of the rolling stock. 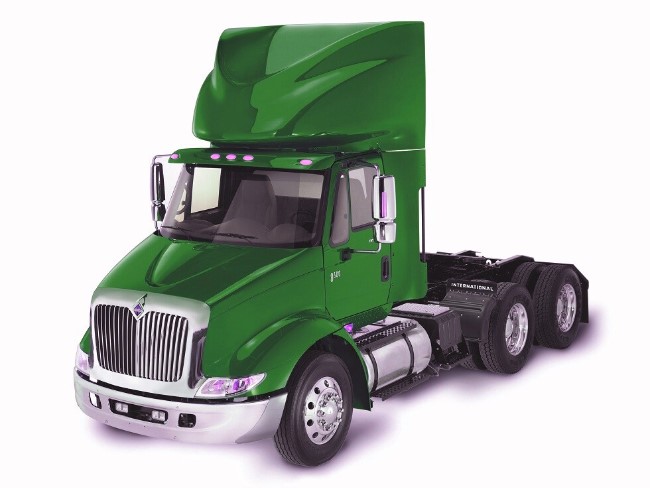 The distance from the cab’s rear wall to the front bumper is 2438 millimeters, and the length of the vehicle’s wheelbase is 3454-6502 millimeters. But the International 8200 tractor model can transport heavy and super-heavy loads on short and long routes. On such vehicles, diesel units of the leading American manufacturers Cummins, Detroit Diesel, and Caterpillar, whose power is 285–430 horsepower.

Also, the same mechanical multi-stage gearboxes from Fuller or Spicer manufacturers are installed on the 8200 model, as on similar models 8000 and 8100. The difference between these trucks is also a spacious sleeping compartment with all amenities. Still, the aerodynamic devices are the same, but the fuel tanks are narrower, the brake mechanisms are similar, they are also Bendix discs, and mobile radio stations are installed in the cabins. The gross weight of tractors 8200 with semi-trailers ranges from 36.3 to 41 tons.