Established in 1972, LinGong Machinery Group (LGMG) is a Chinese construction equipment manufacturer. To that end, LMGMG and VOLVO have agreed to form a joint production of front loaders, excavators, road rollers, and graders (LMGMG 30% and VOLVO 70%), as well as the creation of a new brand for this equipment called SDLG. In addition, LGMG began manufacturing mining trucks in 2010 in addition to their construction equipment. The LGMG mining truck has a spacious cabin and competitive pricing. Dump trucks range in size from 40t to 70t. With a 33% market share in 2015, the company dominated the Chinese mining truck market, selling 1197 units. More than 8,000 LGMG-brand mining dump trucks are currently used in gold and iron ore mines, cement factories, stone quarries, coal mines, and other industrial settings.

LGMG and Sandvik, the world’s leading drilling equipment manufacturer, entered a manufacturing partnership on May 31, 2016. LGMG mining dump truck production will serve as the organizing principle for the manufacturing process. LGMG will contribute 35%, and Sandvik will contribute 65% to joint production. As a result, both new mining dump trucks and cutting-edge drilling equipment will soon be available for purchase.

Despite its 6×4 layout, the mining dump truck was developed specifically for use in the mining industry, particularly in the excavation of deep quarries. LGMG is distinct from most Chinese manufacturers in this respect because its dump trucks for quarries are not based on adapted road machines. Instead, LGMG dump trucks combine the best features of the traditional mining and construction dump trucks into one vehicle. To put it another way, the LGMG dump truck is a middle-of-the-road option for serious quarry work that aims to cut costs in both initial investment and ongoing upkeep without compromising output.

In open pit mining, the construction of large industrial and hydraulic facilities, etc., the LGMG Mining Dump Truck is used to transport rock mass and bulk cargo on technological roads. The LGMG Mining Dump Truck is exceptionally stable and can carry heavy loads. Comfort is prioritized in the cab using a three-stage rubber shock absorber, side shock absorbers in the form of coil springs, adjustable seats also equipped with shock absorbers, a sleeper, and a warm interior trim. 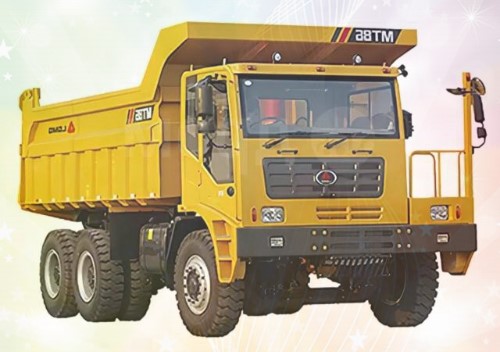