Massey Ferguson tractors outperform many competitors in terms of performance, equipped with high-tech, yet economical engines, which reduces operating costs when using attachments with the ability to perform a full range of agricultural work.

The company was founded in 1847 by Canadian farmer Daniel Massey, who began producing mechanized threshers and opened an agricultural machinery repair business. In 1891, the small company was allowed to enter the world market by merging with the Harris company. For a long time, engineers worked on improving agricultural implements and implements, and in 1930 they offered the farmers a tractor that, in terms of technical characteristics, was several times superior to the tillage machines of that time.

In 1953, Massey-Harris merged with Harry Ferguson Limited to strengthen its position in the market, which produced machines with a three-point hydraulic attachment mechanism for connecting attachments. In 1957, the brand name and logo were finally formed: Massey Ferguson with the famous “Three Triangles”.

The undoubted advantage of Massey Ferguson tractors is their technical characteristics, which are always one step ahead of the time. Modernization of machines takes place in all aspects. Of the positive aspects of technology, note:

Massey Ferguson produces a full range of agricultural and construction equipment: combines, bulldozers, and loaders, but tractors still occupy the leading place among the machines of the Canadian brand. These are universal, high-performance units with low fuel consumption, performing work on plowing soils of different compositions and densities, planting and harvesting tuber crops, sowing seeds, and caring for beds.

The most popular Massey Ferguson brand tractor is a 130 hp AGCO Power four-cylinder diesel engine. According to the technical characteristics, it is assigned to the 2nd traction class. It is aggregated with attachments mounted in the rear hitch and front docking unit, allowing the machine to perform a full range of agricultural work.

For reliability, the tractor is available with a synchronized Power Shuttle manual transmission that provides clutchless shifting. Due to the wide range of gears – 12/12 -, it is possible to optimize the speed mode depending on the type of work performed and the soil quality. Working acceleration in the field – 12 km / h, peak – 40 km / h on an asphalt surface.

The MF 6713 is equipped with an open-type hydraulic system. It has two gear pumps, one of which works exclusively for the machine’s internal components and has a capacity of 37 l / min, and the second is responsible for hydraulics and rear linkage.

The electro-hydraulic system for lifting and lowering loads provides a force of up to 5200 kg, improves the traction characteristics of the equipment, and reduces wheel slip, ultimately leading to an overall reduction in fuel consumption.

In addition to the performance, it is worth noting the ergonomics of the Massey Ferguson MF 6713. The tractor is equipped with a large full-view cab with increased noise and vibration isolation. The workplace has air conditioning and a heater, and a carbon filter is provided for cleaning. Tractor controls are placed under the right hand.

Wheeled tractor for the toughest field work. Equipped with a six-cylinder twin-turbo diesel engine with a capacity of 8.4 liters. The power unit is supplemented with the 3rd generation Common Rail fuel system, which improves the unit’s performance and ensures low diesel consumption.

The MF 8690 tractor is equipped with a continuously variable CTV transmission, so it is possible to obtain the maximum engine speed and adjust the speed without jerks. All this ultimately reduces fuel consumption. The engine and transmission are controlled by the DTM dynamic control system, which works to maintain the set speed.

Like all Massey Ferguson tractors, the MF 8690 uses a three-point hitch. However, thanks to the rear hydraulic system, the machine can lift up to 12 tons of cargo, and with the front attachment – 5 tons. The lifting capacity in this model is controlled by the ELC electronic linkage system, which achieves optimal weight distribution and the most accurate selection of the plowing depth, taking into account the terrain. In addition, thanks to ELC, the possibility of wheel spin is reduced.

The advantage of the MF 8690 model is the operator’s workplace. The tractor has various electronic systems that make it easier to control the equipment. Of the advantages, the OptiRide Plus cab suspension system is noted, which, due to sensors, adapts to any working conditions. It is she who allows the operator to change the stiffness/softness of the movement. 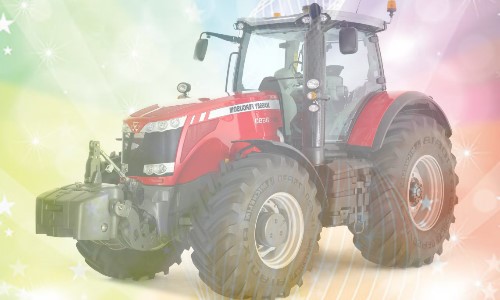 The operating modes are displayed on electronic monitors located on the central panel and near the armrest, on which the buttons for controlling the PTO, the coupling device, and the traction control are placed.

The flagship model in the line of tractors for large farms. According to the technical characteristics, Massey Ferguson 8737 is considered the most powerful model in its class. The tractor has a six-cylinder diesel engine AGCO POWER, which has four valves per cylinder. Furthermore, through the use of an electronic engine management system, EEM, it is possible to control fuel injection, which has a positive effect on the power of the equipment.

The Dyna-VT transmission, in combination with the Supervisor system, provides quick and precise gear changes. Due to the dynamic control of the DVT, it is possible to automatically control the engine speed, maintain speed during fieldwork, and minimize the speed of the power unit without losing power.

The transmission of the MF 8737 tractor is of a separate-aggregate type. It is not connected to the hydraulic tank, due to which it is possible to prevent used oil from entering the gearbox. The PTO operates in several modes within the range of 500–1000 rpm. It can be adjusted depending on the load and the weight of the tare. The load capacity depends on the hydraulics: the rear linkage provides work with loads up to 12 tons, the front independent with an electro-hydraulic drive – up to 5 tons.

The cab in this tractor is panoramic. For the operator’s convenience, an information panel and a central touch display are provided, which display the operating modes of attachments.