New Holland’s lineup of wheel loaders includes vehicles with payload capacities from 12.90 to 23.60 tons. The volume of a bucket ranges from 2.4 to 4.6 cubic meters.

Diesel engines from CNH, IVECO NEF, or Cummins power New Holland wheel loaders. The latter can be found exclusively on W270 models. The range of engine output is 128-202 kilowatts (kW).

Depending on the task at hand, the operator can switch the engine to its optimal operating mode during operation. There are four distinct modes:

In addition, efficient fuel consumption is achieved by an optimal performance at each stage of the work process, made possible by precise electrical control.

This machine can be outfitted with a load-sensing, closed-center, or sealed-system hydraulic setup.

A Z-shaped trapezoid is integrated into the machinery, facilitating a quicker loading cycle and better operability. Also, there’s a mechanism for adjusting the ride’s intensity. The models’ package also includes an improved cooling system that extends the life of internal components. In addition, water conservation measures such as draining are preferable.

The pumps in the machines are either of the axial piston or gear variety.

There are four forward speeds and four reverse speeds on the machine. The brakes are liquid-cooled and can adjust themselves.

Everything in the lineup has been fitted with tubeless tires.

The flat glass in the operator’s cab also helps with visibility. A new switch layout has also been used.

New Holland front loaders can be used for various tasks, including loading and unloading, on both construction and agricultural projects. 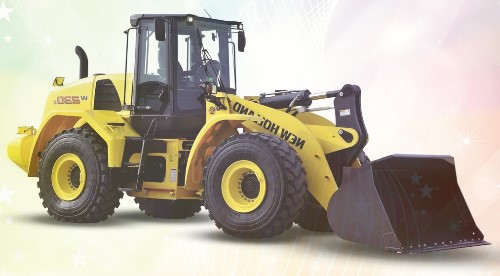