On August 26, the Japanese company UD Trucks showed its latest Quester tractor in Bangkok. The new model is aimed at Asian markets and developing countries. This is the first Japanese truck, representing a wide range of versions and modifications. It is also the first UD Trucks truck to be developed entirely outside of Japan, using the experience of UD Trucks and Volvo Trucks.

There are two engines to choose from – GH8E and GH11E. The 8-liter powertrain (GH8E) is based on the UD Trucks GH7 engine, which has already earned a good reputation for performance and fuel efficiency. The 11-liter engine (GH11E) is a joint development of the Japanese and the Swedes. A wide range of transmissions and rear axle options help to optimize the truck for specific operating conditions. The Quester cab is designed to minimize aerodynamic drag as much as possible. A set of aerodynamic pads has been developed for new trucks.

Another interesting system of the new Quester is the Fuel Coaching System, which will help the driver save fuel while maintaining an average speed. The display shows information to the driver on when to change gear, accelerate or release the “gas” to optimize fuel consumption.

In 2010, serial production of updated trucks of the QUON series was launched. They received new diesel engines such as GH 11 and GH 13. These engines were developed specifically for trucks and differ from their predecessors in increased power, high torque, and economical fuel consumption. In addition, these motors are lighter and have high environmental parameters. New power units are aggregated with a specially designed 12-speed gearbox (gearbox). 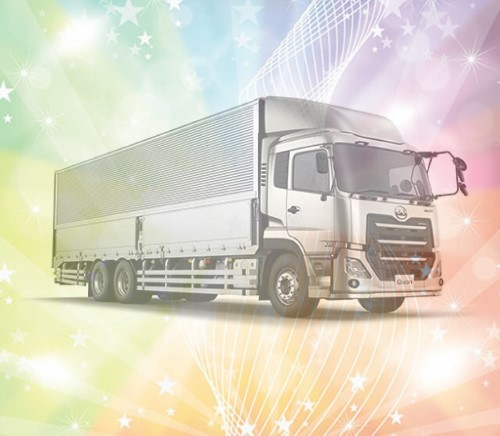 The instrument panel of new cars is supplemented with a multi-purpose display, and increased operational safety is ensured by the electronic, efficient braking system EBS (Electronic Breking System), which ensures the safety of movement not only for body cars (Medium version) but also for tractors with semi-trailers (High version).

Improved versions of UD QUON trucks are offered to the attention of customers:

The vehicles are equipped with a modernized diesel engine GH 11TC capacity of 380 or 410 hp. In addition, it is equipped with an advanced nitrogen oxide reduction system. Also, the engine is aggregated with an improved gearbox (ESCOT-V), which additionally allows:

The collision avoidance system with the traffic in front (Trafic Eue Brake) and the radar installed in the car’s front bumper is noteworthy. The system gives a warning sound signal with a sharp reduction in the distance to the vehicle in front. If the driver does not respond, the electronics will independently activate the truck’s brake system.

UD Trucks celebrated its 80th anniversary in 2015. In this regard, the company prepared especially carefully for the Tokyo Motor Show in 2015, having prepared for demonstration, among other exhibits, two trucks of the QUON family: