From its founding in 1905 until the end of production in the late 1960s, American drivers had a choice of vehicles made by Diamond T. While operational, the House manufactured mostly military transport vehicles for the United States Army and, from 1905 to 1911, automobiles as well.

In 1905, C. A. Tilt established the Diamond T Motor Car Company in Chicago. Tilt’s father, a shoemaker, came up with the business name and emblem, which has a huge “T” (for Tilt) within a diamond to symbolize the firm’s commitment to producing only the finest goods. Trucks were branded with a sled dog wearing a harness rather than the usual company logo. The firm spent its first six years in business producing touring cars, but it shifted its focus to trucks after that time. During World War I, the United States Army’s main truck type was the Liberty Truck, and Diamond T fulfilled an order for 1,500 of them. By the end of the war in 1918, however, only 638 had been produced.

During World War II, the British Purchasing Commission rapidly snapped up a Diamond T 980/981 type heavy truck to use as a tank transporter tractor. During the British Army’s battle in North Africa, the truck was used to retrieve damaged tanks due to its powerful engine and solid build coupled with a Rogers trailer. In addition, Diamond T produced a whole range of 4-ton G509 6X6 series vehicles, which included a variety of trucks such as freight, trash, semi-trailer, and demolition vehicles, as well as several lighter lorries and even a half-track, the G7102. 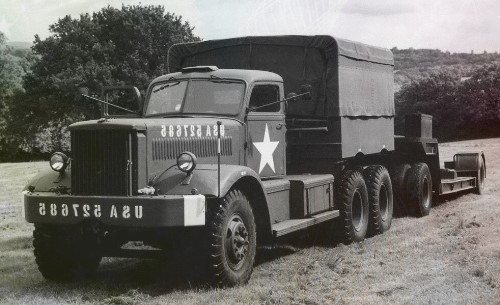 In terms of the value of its military supply contracts during World War II, Diamond T was the 47th most successful American company. Diamond T’s two light trucks for the general public were the Model 80 and the Model 201. 6-cylinder Hercules QX series motors drove both pickups. From 1938 until 1949, factories cranked out 201s of various configurations. White Motor Co. purchased about 250,000 Diamond T trucks in 1958, and in 1967, White Motor Co. amalgamated with the Reo Motor Company to become Diamond Reo Trucks, Inc.