One of the pioneers of mass automotive manufacture, auto designer Ransom Eli Olds (1864-1950) at Oldsmobile in Lansing, Michigan, began mass production of simple and inexpensive passenger automobiles in 1899. After R. I. Olds and his business partners had a falling out in 1904, he resigned and started a new company nearby, which he named REO. While REO may not be as well-known for its passenger cars, it has been one of the largest and most famous truck manufacturers for decades.

In 1906, the first REO vehicles were American Flareboard Express buggies equipped with horizontal 1- and 2-cylinder engines producing 9-16 hp, a multi-plate clutch, a planetary gearbox, and a rear wheel chain drive. They could transport between 250 and 750 kilograms of freight or between five and ten passengers. After opening its truck division in October 1910, REO Motor Truck Co. quickly found success with its 12-horsepower “J” and “H” trucks, selling 2300 units in 1911 and 1912. A 4-cylinder, 25-horsepower engine, and a “regular” 3-speed gearbox were added to the 2-ton Model “J” in 1913.

The 45-horsepower, 750-kilogram Speed Wagon vehicle was developed in 1915 and could go at a maximum of 64 kilometers per hour. They quickly mounted several freight, passenger, and specialty bodies on its chassis. From this unassuming automobile grew the largest REO cargo program ever. For the next 25 years, REO manufactured “Speed Wagon” bonnet series vehicles, which were built almost entirely in-house. It included Junior 500 kg pickups, Power Wagon bus chassis, and Parcel Delivery light postal vans in the 1920s. With a payload of 1.3 tons, a 6-cylinder Gold Crown engine with a chromium-nickel steel block, hydraulic all-wheel brakes, a final drive with helical gearing, and 14 wheelbase variations, the Tonner, Standard, “Master,” and Heavy Duty were produced beginning in 1928. (2900-4500 mm). In the 1930s, “Speed Wagon” offered a wide variety of vehicles, including the light van “Speed Delivery” (45 hp) and pickup “6AR,” as well as 2- and 3-axle bonneted and cabover variants with a carrying capacity of 1 to 6 tons (models “1A4” and “4K5”) powered by a 6-cylinder Silver Crown engine with a silver-plated block head and a capacity of 70 to 87 hp. with a Buda engine producing 107 horsepower. Featuring an inline eight-cylinder powerplant and a two-speed transfer case, the “4H5” heavy-duty model was available. Since 1936, when they first debuted, REO trucks have been distinguished by their broad chrome radiator grilles. Mack assembled many REO trucks (models “1M” through “31M”) in the years 1934-1938. R. E. Olds departed from his second company in 1937 after its board of directors decided to cease production of passenger automobiles.

Trucks with a gross weight between 5.4 and 9.5 tons, the front axle pushed back, and the business introduced a rounded hood with two oval openings on the sidewalls in 1938 under the model numbers “19,” “20,” “21,” and “23.” Synchronized 5-speed Clark manual transmissions paired with brand-new gasoline “Silver Crown” engines (4,020 and 4,720 cc, 89 to 90 horsepower) powered these vehicles. All vehicles were available with either a 4- or 6-cylinder diesel “Buda” engine producing between 66 and 90 horsepower and in reinforced “219/223” variants with a gross weight of 7 to 12 tons (models “D4-19” to “D221”). They also attempted to coordinate the manufacture of Flying Cloud wagon-style buses, which have engines at the rear, under the floor of the passenger compartment. During World War II, REO manufactured a 7.5-ton “29XS” (6×6) chassis for emergency vehicles, powered by a 180-horsepower Hercules engine, and completed a 2.5-ton “Studebaker US6” army truck.

The business remained in a perpetual state of difficulty for decades, focusing solely on updating its pre-war line. In 1946, it sold the ten-ton “25VXS” (6×4) variation with a Continental engine producing 129 horsepower and the two-axle “19BHS” and “20BHS” trucks (89 to 94 horsepower). In 1948, the “C19” and “C25” models took over, while the “30” and “31” heavy vehicles were upgraded to a 200-horsepower Gold Comet engine with simplified lining. 1950 saw the release of the whole pre-war lineup under the index “E” (models “E19” through “E23”), all of which shared the pre-war range’s signature radiator grille that extends onto the hood’s sides and the vertical placement of the “REO” name. In spite of the decline in sales of its antiquated gasoline automobiles, the company was saved by a surge in demand for its M-34 and M-35 army trucks (6×6). The new Gold Comit V8 engine (1953), sleeper cabs (1954), the first cabover truck and engines running on liquefied petroleum gas (1955), and the series “E” with diesel engines “Cummins” with a capacity of 180-262 hp all contributed to her consistently improving civilian program (1956).

REO has started reorganizing and selling itself due to financial difficulties. Thus, in 1953, she became a member of “Bohn Aluminum and Brass,” a manufacturer of aluminum products that also acquired Diamond T. For this reason, the “White” automotive company received REO from Bon in 1957 and Diamond T, the following year, merging their operations in Lansing. The “D600” and “D700” series were REO’s most recent developments. Due to the merger of REO and White and Diamond T in the 1960s, the company expanded its product line to include 43 models powered by 14 different engine configurations. Their output, however, has been falling. They both became a strain for White. Therefore in May 1967, he separated them into the Diamond REO group. 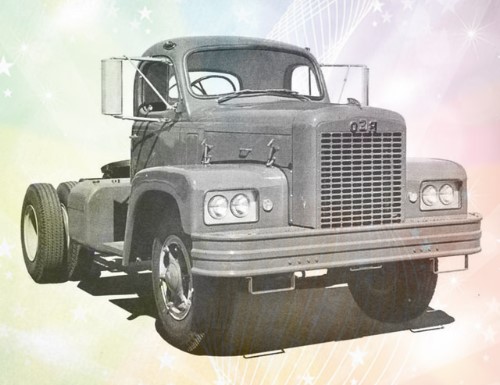