The History of  Ford Trucks

The Ford brand was made famous not only for cars, but also for numerous pick-up trucks, light vans and trucks. The history of the automobile plant FORD begins in 1896, when the famous inventor and entrepreneur Henry Ford built one of the world’s first cars in the world.

Soon after the founding of the Ford company in June 1903, small vans for 300-400 kilograms of cargo appeared on the chassis of cars. The first was a van on the chassis “C”, manufactured in October 1904. The launch of special “E” vans with a 10-horsepower motor from the “F” passenger car model began the following year. An important event in the history of Ford is considered July 27, 1917, when the first “real” truck “Ford TT” appeared, the assembly of which began side by side with the passenger cars “T”.

In fact, the 1-ton “TT” differed from the base “Ford T” only with a stiffer frame and suspension, wheels with cast tires, reinforced by a driving bridge with a worm main transmission and extended from 2540 to 3150 mm wheelbase.

Two years later, a 1-million-pound truck was manufactured, and the share of such Ford cars in the US market reached 75%.

A new stage in the development of Ford came on October 20, 1927 with the release of the A car with a 4-cylinder engine (3285 cm3, 40 hp). Soon on its basis, the production of pick-ups and vans “A” started with the carrying capacity of 600-750 kilograms, and in November 1927 the first 1.5-ton truck “AA” appeared with a wood-metal cabin, reinforced frame and suspension, worm main gear and spiked wheels with high-pressure tires.

By the end of the 30’s the range of Ford trucks consisted of 126 variants. In 1940, Henry Ford, who was a fan of the Nazis, handed over to Germany documentation for 3 ton trucks “018T” and “098T”. This allowed the production of new models “G398” and “V3000” at the Ford plant in Cologne at the height of the war. In the midst of American industrialists, this step aroused hostility toward Ford. However, when America declared war on Germany, Henry Ford turned out to be an active supplier of light and medium-sized trucks for the US Army, sent by lend-lease and in the USSR.

In the years 1949-50, gamma was replenished with 1-ton all-metal wagons “F3” and variants “F5 SOE” and “F6 SOE” half-hood layout. In 1951-52 all cars received a wider front lining, double windshield wipers and a sealed ignition system, the glazing area was increased 1.5 times. In 1952, they first appeared in the top-hat 6-cylinder 3.5-liter engine, and a gamut of power units included engines with a working volume of 2.2-5.5 liters with a capacity of 101-155 “horses.”

The creation of trunk tractors with a sleeping cab above the engine “Ford” began to be engaged late. Only in 1962 he presented a variant of the “N-1000” with a gasoline engine V8 (8.7 liters, 266 hp). The most important achievement was the first heavy diesel truck “HD-1000” with a 220-horsepower engine “Cummins NH220” (Cummins), designed to operate as a part of a road train with a gross weight of up to 35 tons. In 1963 for main transportations two and three axles were created mainly diesel models (from “N500” to “N1100”) with a shortened hood. Gradually the diesel engines spread to the boneless scale “C”.

In 1966, the “H” series was replaced by a new range of trunk tractors “W” with a rectangular reclining sleeping cabin, in which the distance from the front bumper to the rear wall (parameter “BBC”) was 1320-2080 millimeters. The basic 2 and 3 axle diesel models “W-1000D” and “WT-1000D” were used for road trains with a total mass of 29.5-36.3 tons. Since 1965, the production of heavy trucks “Ford” began to transfer to a new plant in Louisville, Kentucky, soon turned into the world’s largest manufacturer of such equipment. Its design capacity was 336 trucks a day.

Diesel models “L-9000” (4 × 2) and “LT-9000” (6 × 4) became the first “real” trunk tractor with a high sleeping compartment and fairing on the roof of the cabin, and the model “LNT-8000” with a shortened hood served by local transportation. The new machines used frames of high-strength steel, hypoid main gear, 2-circuit pneumatic braking system, front shock absorbers and cabins with anti-corrosion protection. At the same time, they produced medium-duty camouflaged trucks “C7000” and “C8000” and main tractors of the “W-9000” series with an upgraded cab above the engine. 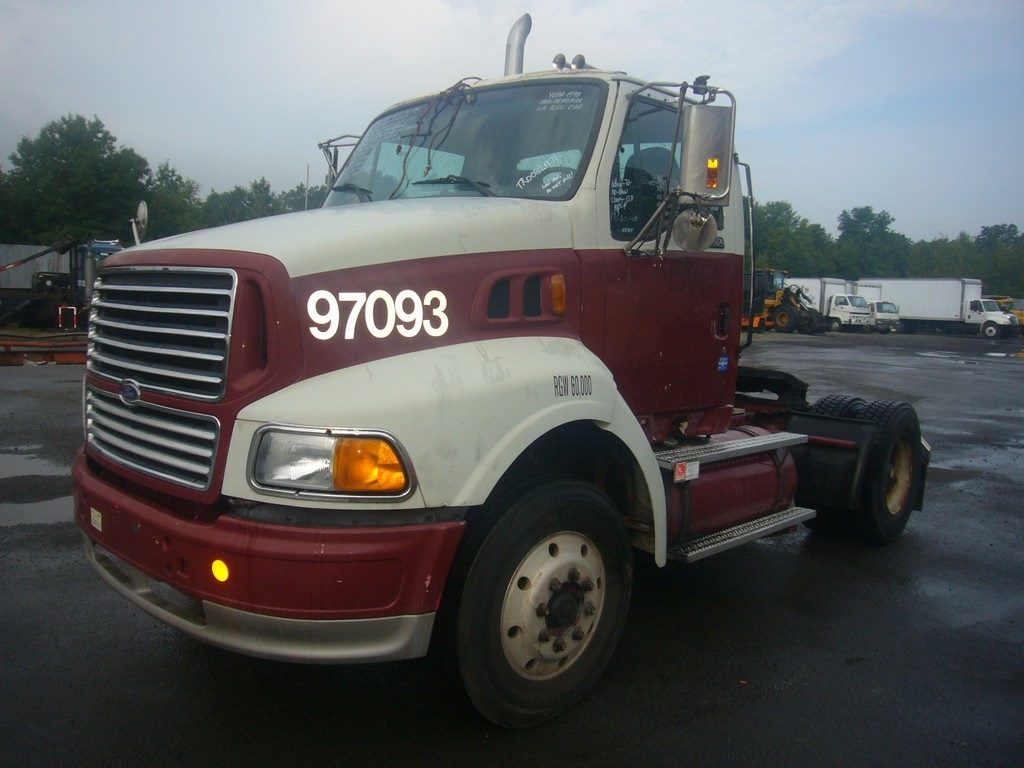 The “LTL-9000” truck tractor, upgraded in 1981, with an engine capacity of up to 435 “horses” successfully competed with the products of other companies, and in the range of medium-sized trucks the models “F600” and “F750” achieved the greatest success on the market. The first major changes were noted in 1988 with the appearance of a new series of trunk hood tractors “A” or “Aeromax” , which included 2 and 3 axle models “LA-9000” and “LTA-9000” with a streamlined cab for work in the composition of road trains with a gross mass of 36-37.2 tons. In 1996, their development was the model “LTA-3500 Aeromax” (6 × 4) with 470-horsepower engine “Detroit Diesel”, 13-speed gearbox “Eton” and rear air suspension.

Vans Econoline (models from E150 to E450) with a payload of 600-1800 kilograms and trucks of the new Super Duty series, which were updated models from F250 to F750 (4 × 2/4 × 4) with a total mass of 4-15 tons, as well as a cargo-and-passenger version of the Explorer, which replaced the Bronco model in 1990. Minivans “Aerostar” (Aerostar) and Canadian “Windsor” (Windsor) are offered as vans and do not differ in driving performance and comfort from cars. The corporation “Ford” at the end of the 20th century was considered the world’s largest manufacturer of vehicles for the transport of goods. In 1999, its plants produced over 3.1 million trucks and buses.