The Freightliner Argosy is a type of mainline tractor that differs from other models of the American manufacturer in the design of the cab – it does not have a hood compartment where the engine is usually located. This option provides excellent visibility, and due to the lack of a central tunnel in the cabin, it has become more comfortable. This is very important for long runs.

The truck was designed to transport long loads. The production of the model began in 1999. She replaced the predecessor Freightliner FLB.

The debut of the tractor took place a year before mass production. Initially, it was a concept car that had similarities with the cargo transport of the Century series. From these models inherited doors, windshields, grille, and head optics. Serial production started a year later.

A feature of the Argosy I generation trucks, is the location of the steps behind the wheel. But to make it convenient for the driver to land, the manufacturer provides a compact ladder that extends automatically. Also, the floor of the truck’s cab has been slightly raised (by 3 inches), which is another distinguishing feature compared to other cabover predecessors.

In 2012, the second generation Freightliner Argosy was born, which, although it retained the previous model’s features, the developers included a number of innovations. However, most of the components carried over from the Freightliner Coronado and, in particular, the doors.

Solutions from the Cascadia tractor (dashboard) were also used. And if the I generation had a two-section radiator grille, then the II series is distinguished by a one-piece design.

For the convenience of the Freightliner Argosy ​​driver, the dashboard is made in a curved arcuate shape. This option is convenient, practical, and multifunctional. To the right of the gear lever, there are recesses for cups and thermos holders. Beauty is added by wooden curls and enlarged illuminated appliances.

The lever itself for previous models was located on the floor, but now the manufacturer has moved it to the panel. Its shape has undergone significant changes – it began to look like a joystick. The practice has shown that this solution is very convenient. In addition, easy access to the bed is provided.

The basic equipment includes an airbag only on the driver’s side, as well as belt pretensioners. Three additional pillows appear as an additional option.

The cabin of the Freightliner Argosy has separate control of the climate system – if necessary, the temperature of the driver’s seat and the sleeping area is adjusted separately.

The lifting mechanism of the cab provides access to the engine and other units. The manufacturer also provided a folding radiator grille with an opening angle of 120 ° for quick and easy maintenance of vehicles. The cab, in this case, can not be raised.

The line consists of three types of power units. All of them are in line with six cylinders, and the gas distribution mechanism (GRM) includes 12 valves. Motors for Freightliner Argosy:

The transmission supplier for the tractor is Eaton, and Meritor has developed new axles. A pair of power units can be an 18-speed Eaton-Fuller UltraShift manual transmission or an Eaton-Fuller Autoshift automatic transmission with the same number of gears. In addition, there are options with 10, 13, and 15 speeds. 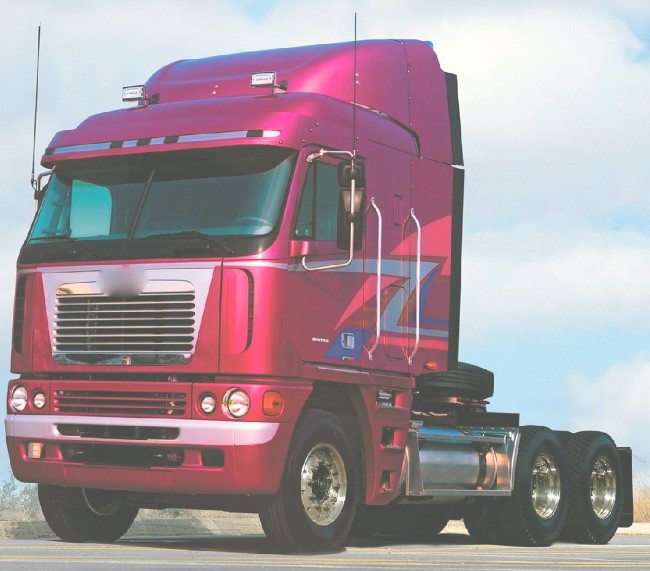