The Freightliner Century is a truck tractor capable of long-haul haulage. This model is high-tech for its time, but in addition to this, it also has such qualities as high performance and increased safety.

In developing the Freightliner Century tractor, the manufacturer tried to simplify maintenance and increase the service life, which, in principle, turned out. Among the original features, we should highlight the clutch system, which has an automatic adjustment, and of course the aerodynamic hood, thanks to which it was possible to achieve good efficiency.

It is worth noting that this model was one of the first American-made cars in which the design is equipped with durable and lightweight composite materials. Thanks to this solution, the truck was significantly lightened, and its payload increased to 34,900 kilograms.

There are only two main modifications of the Freightliner Century tractor. They were issued under the indices C112 and C120. Both of these versions have minor changes, such as the distance from the front bumper to the rear wall of the sleeping compartment. Moreover, this distance is precisely indicated by the numbers in the model index, where the calculation is carried out in inches.

For the Freightliner Century main tractor, several powertrain options were offered from manufacturers such as Cummins, Caterpillar, and Detroit Diesel. The most widely used engine is Detroit Diesel.

This diesel engine has a six-cylinder in-line design and a turbocharging system.

A mechanical non-synchronized gearbox with a robotic switching system was installed in tandem with the proposed engines. But besides this, this truck was often equipped with a ten-speed automatic transmission.

Freightliner Century is equipped with drum brakes, both on the wheels of the front axle and the rear. In addition, for greater efficiency, a vacuum booster and anti-lock braking system ABS are installed.

A dependent suspension is used at the front of the truck, which includes longitudinal parabolic springs and bidirectional hydraulic telescopic shock absorbers. The rear bogie suspension has pneumatic cushions instead of springs.

The Freightliner Century tractor has received many innovative solutions that increase productivity. For example, the cab is equipped with a special aerodynamic hood to help reduce airflow resistance. Thanks to this, the machine has excellent visibility and increased efficiency.

Another remarkable development that makes efficient use of airflow is the grille. It has been designed in such a way that the cooling of the radiator is carried out more efficiently than on other similar trucks. 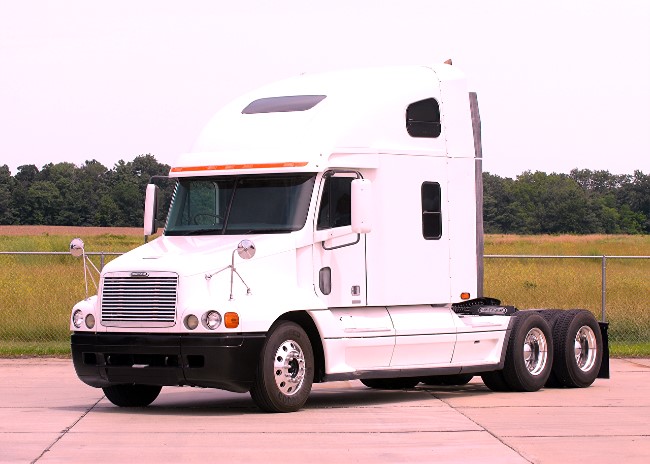 In addition to all these improvements, the manufacturer has also worked on the truck’s safety. As a result, Freightliner Century has a very high safety level. It is worth noting that this model was the first North American car belonging to the 8th class. Its cabin complies with the Swedish and European ECE R-29 crash test requirements and even exceeds it in some parameters.