Freightliner is a successful American manufacturer specializing in the development and mass production of various trucks. The demand for manufactured products is really very great. Enterprises in different countries use American trucks. But over time, interest in the models began to decline gradually, in 2007, the manufacturer introduced its new truck model, called the Freightliner Cascadia. This car is a comfortable and quite productive eighth-class truck tractor.

Truck Freightliner Cascadia is on the list of the most modern models. It was based on a completely new platform, developed almost from scratch. The main volume of production is focused mainly on the American market, as evidenced by its inherent design features.

The model has fairly large overall dimensions. It is characterized by high comfort and significantly increased free space in the cab.

The standard option for this truck was a 455-horsepower diesel engine. It would seem that such a unit is difficult to make economical, but in fact, it has quite optimal fuel consumption, at least for such a truck. For this, the manufacturer has done everything possible. The chassis received a light cabin with improved aerodynamic parameters. Along with this, the engine is not allowed to leave the economy mode and various control systems.

For consumers, the company offered three variations of this truck. The main difference between each modification and any other is the type of cabin installed:

For the Freightliner Cascadia truck tractor, Detroit and Cummins diesel power plants were offered. The presented engines have a maximum output power from 450 to 600 horsepower, depending on the configuration of the truck itself. As for environmental friendliness, the amount of toxic emissions is reduced to a minimum. Another distinctive feature of these motors is the ability to gain speed quickly. In other words, each of the engines can provide maximum torque in almost two seconds, which is very impressive.

The engines also have high durability, which was ensured by extended regeneration ranges. The electronic control of the fuel system is responsible for improving efficiency. In addition, we managed to slightly reduce the load on the radiator thanks to the fan guard, which has a completely new design.

Some variations of Cummins power units can use liquefied or compressed gas for operation. In this case, the maximum engine power is about 400 horsepower, and the maximum torque reaches two thousand newton meters. In addition to fairly good power indicators, such an engine is distinguished by improved efficiency compared to its diesel counterparts. Another difference is the increased environmental friendliness. This motor is fitted with a 300-gallon tank.

The Freightliner Cascadia offers a fairly wide range of transmission options. The consumer can choose both manual and automatic transmissions.

For all manual transmissions, a clutch with a hydraulic control drive is used, which provides a very soft and smooth pedal stroke, which positively affects the comfort of driving a truck.

At the rear, a dependent suspension was also used, but instead of springs, pneumatic elements (pillows) were used here.

In some configurations, the manufacturer can equip the truck with fog lights integrated into the front bumper, side windows in the sleeping compartment, a special visor installed above the windshield, and an additional aerodynamic body kit.

It is worth noting that the manufacturer took its new model very seriously. The first samples were subjected to very long tests. Together with fine-tuning, all this took more than one million engineering hours.

Modifications of the model were also carried out with the help of the company’s wind tunnel, where the experienced trucks spent a total of about 2,500 hours.

As a result of a long development, the manufacturer managed to create the most aerodynamic mainline tractor, which has no competitors in this parameter in its class. Compared to its predecessors, the new model boasts a three percent improvement in fuel efficiency.

Among the main features of the Freightliner Cascadia truck, it is necessary to highlight the presence of rack and pinion steering, which has not previously been used on any eighth-class tractor. Thanks to this decision, it was possible to reduce the weight of the car by two dozen kilograms. In addition, the new steering design takes up much less space and makes the tractor more maneuverable and easier to operate.

All variations of cabins with a sleeping bag are already equipped with a refrigerator from the factory. Optionally, a microwave oven can also be installed. This haul tractor also features power windows, comfortable seats with multiple settings, a clear and user-friendly dashboard, an efficient heating and air conditioning system, a one-meter wide sleeping bag, plenty of lockers and shelves, a TV, and many other options. In addition to all this, the cabin has excellent sound insulation and vibration isolation.

Maintenance generally does not require high financial costs and time. The HVAC electronic diagnostic system and a number of design features of the truck itself are responsible for all this. Among the latter, it should be noted head lighting lamps that have an extended service life and a wide-opening hood that provides full access to the power unit and many nearby nodes. 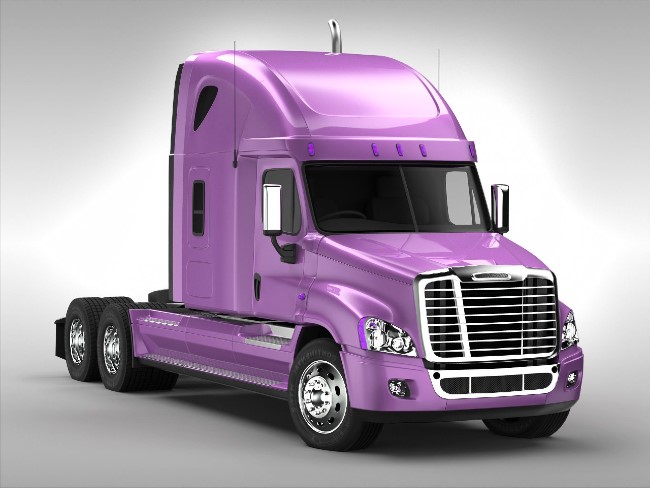 As for electronics, the manufacturer equipped the tractor not only with security systems familiar to European cars but also with many of its own, which are actively used on Century and Argosy models.

Judging by the feedback from the owners, the Freightliner Cascadia truck tractor turned out to be a very reliable and comfortable car that can cover really impressive distances. Inside, everything is done for maximum comfort, both at work and in the parking lot.