The German Democratic Republic (GDR) produced a medium-duty truck known as the IFA W50. After 25 years on the market, 571,800 were made.

IFA stands for the Industrial Association of Automotive Manufacturers of the GDR; hence the exact model identification is W50L, not IFA. Almost every vehicle factory in the GDR was represented here. The W50L was manufactured in Ludwigsfelde, which is reflected by the model index’s letter L. The number 50 represented the truck’s load capacity in centners. The letter W indicated the city of Werdau and (that is, 5 tons). Originally, the truck ran on a 4-cylinder swirl-chamber diesel engine producing 110 hp from the preceding S4000-1 model; from 1967, however, it has been fitted with an upgraded version, a 125-horsepower, 2-300-rpm, in-line 4-cylinder diesel engine licensed from a West German firm MAN. About sixty distinct variants of this truck were produced (military, fire, construction, and other special vehicles). The W50L was offered with either a short base measuring 3200 mm or a long base measuring 3700 mm. All-wheel drive has been added to several variants to improve their off-road performance. The 4×2 modification did not have power steering. The maximum safe weight for the W50L-based truck crane is 10 tons. The maximum weight for the saddle in the road train’s variation is 16 tons.

The first CNG-powered variant of the truck was built in 1984.

This type formed the backbone of the DDR’s fire engine fleet.

While W50L was most popular in the German Democratic Republic, it was also extensively used in other socialist bloc countries, as in many Asian, African, and South American nations. Ellie was a popular name for this vehicle in the Soviet Union, one of the largest markets for this particular make and type of automobile. From 1971 until 1988, this model of the vehicle was widely distributed in the Soviet Union, mostly in the form of a construction dump truck with three-side unloading and a matching trailer. Furthermore, displays remained — customized automobiles on the chassis of these trucks — after several presentations of GDR-produced equipment in the USSR.

Despite having some impressive technological specs, the vehicle was woefully out of date even by the turn of the 1980s. Company employees toiled over prototypes of new designs to replace discontinued products. A beefier L60 wasn’t introduced until 1987, towards the end of the GDR’s existence, although it was essentially the same vehicle with a greater payload and a more powerful diesel engine. The manufacturing of antiquated goods is now irrelevant due to the consolidation of the two German states into a single nation and the demise of the primary purchaser, the socialist camp. Back in 1990, Daimler-Benz took possession of the Ludwigsfeld facility again. The plant’s new owners sought to modernize production by adding a cab from the Mercedes-Benz LN2 freight family on the L60 model they were making for a while, but by the mid-1990s, they had totally converted to making the concern’s own goods. 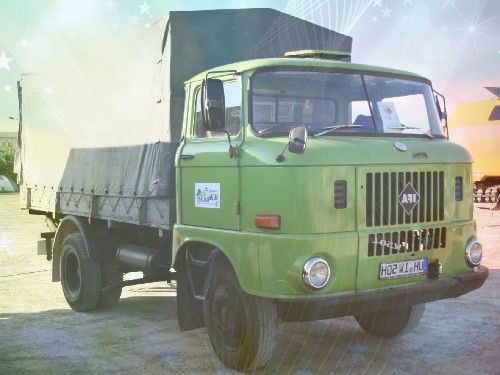