When it comes to the construction of large military vehicles, Oshkosh is unrivaled anywhere in the world. These vehicles are essential to military operations since they must be able to operate in harsh environments, such as those found on the outskirts of a war zone. Several non-traditional all-wheel drive multi-axle trucks are part of the current Oshkosh program. They’re made for rapid installations of special equipment and missile weapons and the rapid transfer of large military equipment on highways off-roads.

The M-911 (6×6) truck tractor has been manufactured by the company for some time now, and it is used as part of a road train that can weigh up to 102.5 tons in total. It is a Heavy Equipment Transporter, or NO for short, and is used by the United States Army. The vehicle has a 12.1-liter Detroit Diesel V8 two-stroke diesel engine that produces 450 horsepower. With a fully automatic Allison 5-speed gearbox. One can also get an 8×6 version of it.

About 750 of these vehicles were delivered to the US Army in the early years of manufacturing, where they saw service as tank tractors with a top speed of 72 km/h. The tractor is designed to be transported by transport aircraft despite its own weight of 18 tons and enormous overall dimensions (9373x2896x3404 mm).

To facilitate the rapid transportation of the new American M-1A1 main tank on road trains weighing up to 105 tons, the M-1070 (8×8) truck tractor was developed from the M-911 in 1990. It is a type of the more sophisticated HETS, or Heavy Equipment Transporter System, used to move large machinery.

This tractor stands out from the crowd thanks to its tall hood and its four driving axles, three of which are positioned in the back and all of which have single tires. Both the front and back wheels can be turned. The tractor has the same diesel engine as the truck, but with a turbocharger and 500 hp instead of just 300. It also has an automatic transmission. The steel spars that make up the structure measure 356 millimeters in height and 89 millimeters in width. The six tank crew can ride in the cabin’s semi-armored comfort. All drive axles from Hendrickson are suspended by semi-elliptical springs. A tire inflation system is included as standard equipment for both the vehicle and the semi-trailer. The tractor weighs in at a hefty 18.6 tons. However, the 9195 mm length and the 3735 mm height are manageable in large transport planes.

Oshkosh has been manufacturing their HEMTT (8×8), a heavy, highly mobile tactical vehicle, since 1982. It has a payload of 10-11 tons and a gross weight of 28-43 tons. It worked out so well that the company was commissioned to produce 5,350 units within its first few years of operation.

The Detroit Diesel engine powering NEMTT can produce 445–450 horsepower. It incorporates an automated gearbox. It has a classic 2-seater low cab and steerable, drive-disconnecting wheels up front. The machine’s low center of gravity and 600 mm of ground clearance gives it exceptional off-road capability. It can carry 10 tons, has a range of 644 kilometers, and ascend 60 percent of slopes. Its top speed on the highway is 100 kilometers per hour. The NEMTT M-977 truck with a one-ton crane is the most common configuration. The M-978 tanker, M-983 truck tractor, M-984A1 recovery vehicle, and M-985 chassis outfitted with a Patriot missile launcher are just a few of the many variations that are manufactured. In addition to the standard M-977 model, the company now makes an LHS-equipped M-977 model for transporting containers, swap bodies, and palletized goods. Currently, over 15,000 NEMTT machines have been produced.

The new M-1075 (10×10) is a five-axle cargo transporter-tractor powered by a 500 hp engine and has three independently steered axles compatible with the M-1076, a three-axle trailer. The M-1074 variant of the tractor and trailer is fitted with a mechanism for expediently transporting items in customized wooden boxes on pallets PLS (Palletized Load System). The vehicle itself is 10.7 meters in length, while the entire road train is 18.9 meters long. This massive vehicle, which weighs in at a whopping 62,4 tons, can attain speeds of up to 91 kilometers per hour while traveling at top speed. The quickest and most efficient way to move large amounts of military equipment and supplies from one location to another is with this design. So far, Oshkosh has produced 2,600 of these semi-trucks for the road. 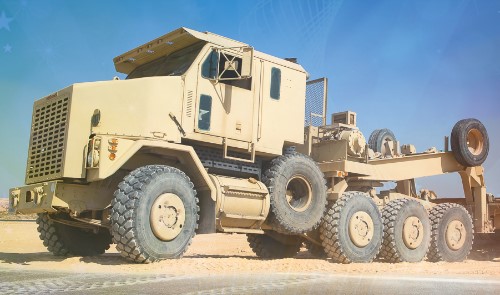