American truck manufacturer Paccar is among the world’s top three. It also manufactures engines for use in DAF vehicles and other brands.

Motors having a displacement of 12.9 liters (generating 360–510 hp) fall under the MX classification. Torque ratings range from 1775 Nm to 2500 Nm, and they stand out for their dependability. Power units on the series have SMART injection and SCR technology, making them compatible with the Euro-5 environmental classification. In addition, the MX engine can meet EEV standards because of the existence of a particle filter.

The reliability of Paccar MX engines has increased due to their redesign. In addition, the designers successfully extended the maintenance interval to 90,000 kilometers.

If synthetic oil and a centrifugal filter element are used, the distance between maintenance stops climbs to 150,000 km.

One of the motor’s characteristics is a built-in motor brake, which can be used to gradually increase the engine’s output. From 1500 rpm, it can provide 200 kW of braking power, and at 2100 rpm, it can generate 325 kW.

Let’s quickly compare the characteristics of each candidate:

Paccar’s more widely used MX 11 and MX 13 engines deserve their own group because they are found in so many different types of vehicles. Below, we shall go deeper into their technical aspects and design nuance.

Featuring a cutting-edge injection system and a variable geometry turbocharger, the Paccar MX-13 is a 12.9-liter Euro 6 engine. As an added bonus, the developers have included a new and better control system that ensures productivity without increasing expenses.

The Paccar engine is a cutting-edge innovation that satisfies present-day standards for reliability and environmental friendliness. Their durability, enhanced performance, and low fuel costs make them an excellent choice. They serve as the primary motive force for DAF trucks and other vehicles.

The manufacturer includes a recirculation system, particulate filter, and selective catalytic reduction (SCR) to ensure the lowest possible environmental impact. Extra torque at low RPM in top gear from the motors is a boon to fuel economy.

The diesel turbocharged supercharged total combustion internal combustion engine is under consideration. SCR, EGR, and DPF systems are all available. The Euro-6 requirements have been met in full. The compression ratio is 18.5 to 1, the cylinder diameter is 13, and the piston stroke is 16.2 cm.

Components of the layout:

The fuel and air delivery system of the Pakkar MX-13 engine has been upgraded. The fuel is heated and prepared by a heater installed within the tank. The water is automatically drained and filtered. Nozzles capable of delivering an ignitable mixture at pressures up to 2500 bar are fitted at the output. 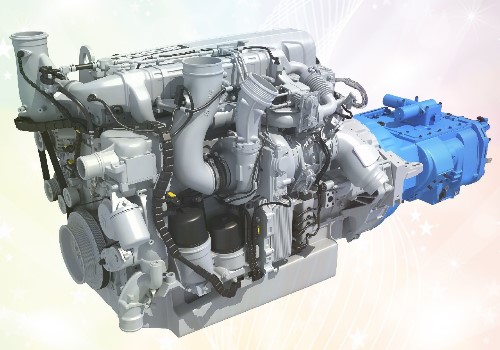 A turbocharger and an air cooler are part of the system that draws in air. The turbocharger’s geometry can be adjusted as needed. A block houses the various components of the lubrication system: filters, an oil cooler, pipes, valves, and a thermostat.

A centrifugal bypass valve is included for long-term reliability. The oil-cleaning filter element is a full-flow type, and the cooler is managed by a thermostat in a stainless-steel heat exchanger.

This vehicle is powered by a PaccarMX-11-10.8-liter engine, which may generate 290–440 horsepower, differences in size, profitability, weight, and noise level. DAF Trucks of the Netherlands developed and began manufacturing this model in the fall of 2013.

The developers have included an improved double camshaft. Manufacturers employed advanced construction techniques that included adding graphite and a vertical rib to boost rigidity and quietness. The cylinder block has been outfitted with as many features as possible to extend its useful life. Pipelines, for instance, can take the form of channels, and pressure-generating pumps can be embedded directly into the concrete itself.

The fuel delivery system utilizes a pre- and post-injection device and a common frame that provides a pressure of 2500 bar. This layout makes it possible to cut back on fuel use and ensures that it gets distributed evenly.

Several improvements have been made to the engine as well, such as the elimination of the need for a separate drive for the fan by mounting it directly to the crankshaft. This results in lower operating and fuel expenses. The motor features a water pump, a combined generator/compressor unit, and an oil block with a filter integrated into its design.

Paccar FR engines are a subset of this larger category; they are 4-cylinder power units that are vertically arranged; they are turbocharged, and they use clean combustion to power the vehicle. To be seen as a row of the following prototypes:

The FR has a working volume of 4.5 liters, a cylinder diameter of 10.7 cm, and a piston stroke of 12.4 cm. The motor has the following features: Features a cast-iron ladder-type frame, a cylinder head with separate channels for starting and releasing the engine, aluminum pistons with symmetrical concave chambers and a cooling channel, a forged camshaft with induction hardening, a common-rail fuel injection system, an adjustable starter, and electronic control.

Standards and technologies for SCR and EEV Paccar engines ensure that they operate at peak efficiency. The most important ones are as follows: