Founded in 1897 by brothers Lewis and John Clarke, the Autocar automotive brand originally went by the name “The Pittsburgh Motor Vehicle Company” for the first two years before being renamed “Autocar” in 1899. The foundation for what would become one of America’s most iconic tractor brands was placed in Erdmoor, Pennsylvania, on January 1, 1900. In addition to these developments, Autocar produced the first American automobiles equipped with a driveline, and porcelain insulators were first employed in spark plugs.

In 1908, Autocar developed the first truck with a cab mounted on top of the engine to use the cargo platform better. Autocars better fit the description “with an engine positioned behind the seat” because of their layout. Before moving on to larger vehicles, this manufacturer focused on producing smaller buses with storage space for electronics beneath the driver’s seat and in the chassis. In 1907, the first freight Autocar was introduced, and in 1908, production of the 1-ton model “XVIII” with a wheelbase of 2160 millimeters started.

The vehicle had a horizontally mounted two-cylinder engine producing 18 horsepower, a three-speed manual transmission, and rear-wheel drive. The subsequent “XXIU” model was a commercial smash, with a load capacity of 1.5-2 tons and a wheelbase of 2460 millimeters. These machines were manufactured for around 20 years with just minimal adjustments. They amassed 30,000 pieces altogether. Once a manufacturer of passenger automobiles, Autocar switched to trucks in 1911 and remained in that industry until its demise. They were also put together in Canada and the UK during World War 1.

Cars with a gross vehicle weight of 2 to 5 tons were first mass-produced in 1919. These vehicles were equipped with 4-cylinder engines producing 29 to 40 horsepower and mounted vertically beneath the driver’s seat. A fleet of fully laden 2- and 3-ton cars drove from California to New York to drum up publicity. Autocar simultaneously manufactured electric vehicles that could carry between one and three tons of cargo. With a payload capacity ranging from 500 kilograms to 5 tons, a wheelbase ranging from 2.5 to 4 meters, two or 4-cylinder engines with carburetors from Stromberg, and Bosch electronic ignition, the company’s program included 20 models (from “T” to “M”) by the middle of the 20th century.

At this point, Autocar manufactured each component for their vehicles independently. A new line, with a towing capacity of 1.5–7.5 tons and powered by 4–6 cylinder engines with enormous protective grilles in front of the radiator and bolted connections instead of rivets, has been manufactured since 1926. Four-wheel-drive variants of several cars were available. Autocar gained its initial notoriety in the early 1930s when it introduced a tiny, all-metal wagon-type cab that was situated above the engine and had a rounded, forward-facing front panel. It has been standard on U-series trucks since 1933.

Given the taxi’s overwhelming commercial success, rival automakers White, Mack, and GMC quickly adopted its design philosophy, body style, and general aesthetic for their vehicles. As early as 1935, Autocar was experimenting with cabover chassis powered by Waukesha diesel engines. By the 1930s, the program’s foundation was set in place by the bonnet trucks “RH,” “D,” “DC,” and “N,” each of which could carry between 2.5 and 8.5 tons and was powered by a 6-cylinder gasoline engine that dispensed between 75 and 94 liters of cubic capacity.

A dump truck, “DF” (4 4), powered by a Cummins diesel engine, joined them. In 1936, a redesigned, more aerodynamic cabover “UD” (34 horsepower) with a payload capability of 3-6.5 tons was introduced. As a result of the new generations’ economic success, Autocar made significant changes to the program in the second half of the 1930s and decreased the proportion of its own units produced. In 1938, he provided 28 models, each ranging in gross weight from 6.2 to 22.5 tons. These included seven cabover models (designated by the letters UA through UT), truck tractors, and specialty chassis based on the cabover designs.

They had Brown-Lipe, Clark, or Fuller transmissions, Eaton and Timken axles, Bendix, Lockheed, or Westinghouse brakes, and their gasoline engines or Hercules engines ranged in power from 73 to 123 horsepower. Autocar provided a range of 62 vehicles with a gross weight of up to 27 tons after further unification on the eve of World War II.

This comprehensive program paved the way for the firm to acquire lucrative and substantial orders shortly after the war broke out, mainly for all-wheel drive vehicles and 4 x 4 truck tractors that were put into service with the United States Army. Models “11-2044,” “U-4144,” “U-5044,” and “U-8144” had payload capacities of 2.5 to 6 tons and were powered by gasoline engines producing 84 to 112 horsepower. They also included 4- or 5-speed transmissions and 2-speed transfer cases. Additionally, Autocar contributed to the manufacture of tracked APCs.

The position for Autocar deteriorated when the war ended because, despite the vast program, the total output for the army was insignificant. A relatively limited selection of standardized 2- and 3-axle motorcycles was available from her in 1946. Formerly Autocar’s crowning achievement, the cabover series has been whittled down to only three 2-axle trucks (the “U50,” “U70,” and “U90”) carrying a combined 6-8 tons of cargo.

Six-cylinder gasoline engines producing 119–165 hp were standard, with the Cummins HB-600 diesel engine standard on the more powerful models (10980 cm3, 150 hp). In the 1950s, Autocar primarily focused on improving the cab and making various variants of the bare chassis. White took charge of the financially unstable Autocar in 1953. We’ve transferred production to nearby Exton, Pennsylvania. The firm shifted its focus to producing chassis and tractors in the building, forestry, coal, oil, and transportation sectors.

They were based on the robust designs of the classic “C” and “DC” series. In 1958, Autocar introduced the “A” hood series, which contained the aluminum frame, cab, and chassis sections of the basic tractors “A70T” and “A75T” (6 4). With this improvement, they shed a fifth of their weight while increasing their carrying capacity by 2.5 tons. This makes the firm believe they might be successfully deployed as mainline tractors. All-stainless steel cabins and White or Cummins diesel engines powered the latest generation of C65 and C90 bonnet trucks.

In 1957, Autocar’s “AP40” 3-axle 40-ton dump truck with a V12 diesel engine was the company’s most significant vehicle (600 hp). The firm started using more powerful Cummins and Caterpillar diesel engines (ranging from 220-375 hp) in the 1960s, increasing the carrying capacity of vehicles and introducing bonneted and cabover chassis with wheel configurations ranging from 4-2 to 8-4. Back in the 1970s. While the “A” series of truck tractors had two base models, the “A42” (4 2) and the “A64″ (6 4), all of which included a luxurious Custom cab with torsion bar suspension and a sleeping compartment, they ultimately failed to compete in the market for trunk tractors.

They have frames assembled with bolts from spars and crossbars of chromium-molybdenum profiles 273 mm high and up to 16 mm thick; all-metal welded cabins with sound insulation; fenders made of steel or fiberglass; large-area aluminum radiators with protective grilles; air conditioning in the cab; double main gears; 2-stage power take-off shafts; fire system in the engine compartment; and a variety of other features. White’s Constructor brand was expanded to cover the Autocar line of 3-axle construction chassis in 1975.

Three years later, when “White” was on the edge of bankruptcy, an effort was made to design a new chassis called “Designer-2.” Unfortunately, this model never went into production. In 1980, White transferred all Autocar manufacture to their Ogden factory, where they also assembled Western Star trucks to lower manufacturing costs. The Swedish firm Volvo purchased White the following year. 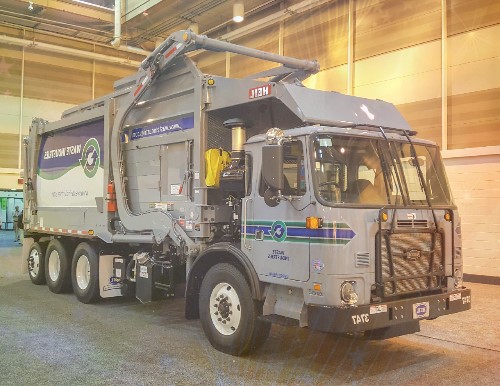 After updating to new Caterpillar diesel (325-450 hp), 6-speed main and 3-speed Fuller gearboxes, Rockwell hypoid drive axles main gear, and roomier cabins, Autocar maintained production of their famous “DC” series and “AT64F” truck tractors. They reached speeds of up to 72 kilometers per hour. The “DK” and “DS” series of construction chassis came in 1987, a consequence of a combination of the mechanical section of the earlier “DC” models with new cabs.

The Autocar division has been building the “ACL” series of chassis since the founding of the Volvo-GM Heavy Truck Corporation in 1988 under the White GMC brand. Several unified models, ranging in name from “ACL42” to “ACL84,” had wheel formulae inserted into their indexes (4×2, 4×4.6×4, 6×6, 8×4). The combined weight of a road train may reach 105 tons, with individual cars weighing between 15.9 and 44.5 tons.