The American company Mack was created by the Mack brothers in 1900 in New York (a few years later, she moved to Pennsylvania) to manufacture trucks and buses. In 1979, 10% of the firm was bought by Renault, and by 1990 Mack had become a subsidiary of the French automaker. In 2001, AB Volvo became the owner of Mack. In 2009, the manufacturer’s headquarters were moved to Greensboro, North Carolina. Truck factories are located in the US and Australia.

On this page, you will find Mack’s truck service manuals.

Mack Anthem commercial vehicles have been manufactured in the United States since 2018. As a result, this new flagship has replaced the previous Pinnacle model.

Anthem stands apart from the crowd of American pickups with its rectangular headlamps and vertical ornamental stripes on the grille and bumper. Extra mirrors mounted on the hood are another nontraditional approach (they are offered as an option).

A roomy sleeping area with a microwave, TV, drawers and storage sits within the classic cabin design. One without a sleeping bag will also be freed to work on shorter routes.

Mack Anthem has diesel inline six-cylinder engines that are either 11 liters in size (330-411 horsepower) or 13 liters in size (600 hp) (390–451 hp). Mack, unlike most other American truck makers, builds its engines. Choose from a manual, semi-automatic, or fully automatic gearbox.

Mack Granite has been manufacturing trucks for the construction and mining industries since 2002. Vehicles on the market include Mack MP7 11-liter, Mack MP8 13-liter, and Cummins ISL 9-liter engines. Motor output ranges from 325 to 505 horsepower. Both manual and automatic transmissions are standard in modern automobiles. Cars manufactured by Mack Granite are available for purchase in the USA, Africa, Australia, and the MENA region.

The Mack LR is a specialized truck chassis designed primarily for garbage trucks. The car has a low cabin shifted forward, with two steering wheels – on the left and right- and the driver can either sit or drive the car while standing. The model is equipped with a Mack MP7 engine running on natural gas (300-325 hp) and an automatic transmission.

The Mack Pinnacle series of heavy bonneted trucks have been produced in the USA since 2006. In some countries of South America, this model is sold under the name Mack Vision Elite. The car has two versions that differ in external design: one is made in a modern style, and the second – with a classic angular design.

Buyers can choose from a Mack Pinnacle truck with or without a sleeper. Under the hood are Mack MP engines with power from 325 to 505 hp.

The Super-Liner mainline tractor, designed for super-heavy road trains, is produced and sold in Australia. The machine is equipped with a 16.1-liter MP10 engine (600-685 hp) and a manual or automatic transmission. 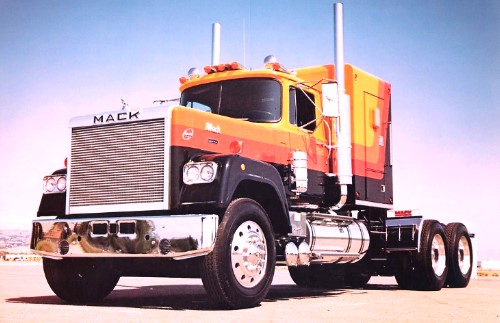 The Mack TerraPro range of cabover trucks is sold in the US, Canada, Australia, and select countries in South America. Machines create various special equipment: dump trucks, concrete mixers, tanks, garbage trucks, and others. In the model range, there are also versions with a low cab.

In 1995, Mack’s Titan line of heavy trucks debuted Down Under (cars are made here, at a factory in Queensland). Production in the United States started in 2008, but the model was discontinued in 2016; sales continued in Australia.

The Mack Titan from Australia is a 6×4 or 8×6 truck tractor designed specifically for “road trains” (a convoy of several trailers). Vehicles use Mack MP10 16-liter, 6-cylinder diesel engines producing 600 to 685 horsepower paired with either manual or automated gearboxes.

The Mack Titan was available in the United States as a tractor and a chassis for massive dump trucks used in the building and mining sectors. The vehicles’ identical powertrains generated between 515 and 605 horsepower.

The Trident family of trucks is manufactured and sold in Australia. On sale, the machine is presented in versions of the main tractor and a chassis for body installation, and it is often used to tow super-heavy road trains weighing up to 130 tons. Cars are equipped with a Mack MP8 engine with a volume of 12.8 liters (500-535 hp) and can be equipped with both a manual and automatic transmission.