William Brockway started his carriage business in the little hamlet of Homer, close to New York, in 1851. This was the beginning of what would become the Brockway automotive firm. He ran the firm for 35 years until passing the reins to his son George, who, after relocating to Cortland, New York, started a trucking company in 1912. In the same vein as the Chase truck, the first Brockway vehicle was a cargo van with a payload capacity of 650 kilos, powered by a 3-cylinder, 2-stroke air-cooled engine and riding on tall wooden wheels.

The 2-ton “D” variant, powered by Continental, was introduced the following year. After WWI, Brockway focused on models that could carry between 1.5 and 5 tons of cargo, sometimes combining units from different manufacturers. The chain drive was changed out with a cardan shaft in 1917. Models “S2,” “K3,” “K,” “R2,” and “T” all had similar underpinnings; each was powered by a Continental or Wisconsin engine and fitted with a Brown-Life gearbox and Timken axles.

Only lightweight vehicles may be ordered with pneumatic tires. In 1928, 5,500 trucks were produced, and the money made from their sale paid for the purchase of Indiana. However, it was sold to White-owned businesses during the Great Depression. Starting in 1930, Brockway began manufacturing electric vehicles with payload capacities ranging from 250 kilos to 7 tons. The manufacturer provided the same chassis for gas or electric powertrains to keep prices down.

By the 1930s, Brockway had released 26 “X” series bonnet types, with capacities ranging from 1.5 to 9 tons, and powered by 6-cylinder Continental engines producing between 71 and 135 horsepower and delivering 560 to 720 foot-pounds of torque. One of the giant trucks ever built was Brockway’s 30-ton V1200 from 1934; it was driven by a 240-horsepower American LaFrance engine and could travel at a top speed of 72 kilometers per hour.

Company finances were bolstered during World War II when they produced 1165 “666” (6 6) army 6-ton trucks based on the White vehicle. Brockway’s 20 offerings from the 1950s provided the foundation upon which pre-war models were built. Eaton 2-speed rear axles and sleeper cabins are the only updates made to the 260X series’ most giant trucks. The company’s production dropped from 4212 in 1946 to 611 in 1954, a steep decline.

The outcome took little time to materialize: in August 1956, Brockway formally became a branch of Mack. The firm was initially somewhat autonomous, but in 1958, they released a new line of Huskie bonneted trucks, named after the husky dogs used as sled dogs in northern American areas. There were 16 versions in this lineup, with a gross weight of up to 17.5 tons, by 1961. They were powered by Cummins and Detroit Diesel engines ranging from 125 to 200 horsepower, and subsequently Caterpillar.

Beginning in 1963, when a sizeable 3-axle series “400” was outfitted with a cab above the engine from the trucks “Mac” of the “F” series, the company’s influence started to grow; this design was eventually used on a series of 2-axle tractors. Huskiedrive transmissions with 5- or 8-speed gearboxes and 2-speed drive axles have been operating since 1968. In addition, Huskiteer, a series of low-bed chassis designed for use in emergency vehicles, such as trash trucks and fire trucks, was introduced in 1971 as part of the “400” series. 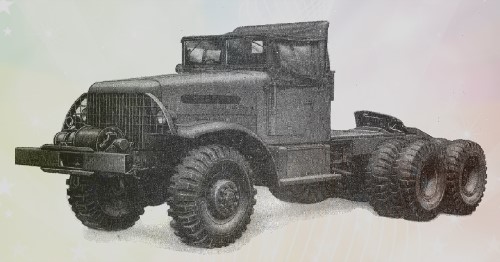 The firm has manufactured the “700” series of heavy hood trucks since 1975; they are mechanically identical to the “Mack” trucks of the “R” series, except for their form and radiator liner. Ultimately, the Brockway brand was discontinued because its vehicles were similar to Mac offerings when production ceased on June 8, 1977. So far, Brockway has produced 91,863 automobiles.