Hino 700 is a large-capacity truck with a 6×4 wheel formula. The scope of these trucks is quite comprehensive and covers such areas as construction, industry, various cargo transportation, and much more. The model’s versatility is explained by a relatively wide choice of modifications and the possibility of installing any add-ons.

In general, almost all trucks manufactured by the Japanese manufacturer Hino Motors Ltd (part of Toyota Corporation) are of the highest quality and reliability, which is typical not only of the 700 series but also of other families. The machines have a modern, attractive design and also have an excellent economy and high performance. In addition, the installed cabin can boast of a high level of comfort and ergonomics, as for a truck.

The Hino 700-series of trucks in Japan is produced under the name Profia. However, apart from the location of the steering wheel, it is no different from the 700 series cars.

Trucks were first introduced to consumers in 1981. The cars stayed on the market until 1992, and the second generation was later introduced. Even then, they proved themselves on the good side and, throughout the years, did not reduce the level of quality and reliability. Due to this, new versions of the Hino 700 are in rather high demand at the present time, not only in the Japanese market but also in many others.

The entire Hino 700 family has a universal frame on which a wide variety of superstructures can be installed, thereby expanding the scope of these trucks. The most popular versions are those equipped with an isothermal van, a refrigerator, evacuation equipment, a tank truck, a platform for transporting containers, a crane-manipulator, a truck-mounted concrete mixer, a logging platform, and much more. It all depends on the operational requirements.

In 2010, the manufacturer upgraded its heavy trucks. Now new power plants have become available for them, which have improved environmental performance and more economical fuel consumption. Previously, six-cylinder diesel engines were offered for all models, the volume of which was 10.5 and 12.9 liters. Their power at the same time was 300 and 410 horsepower. For truck tractors, slightly modified options were used, with a maximum output power of 350 and 520 horsepower.

In 2011, the truck family was again upgraded. For the most part, the second modernization is associated with a new law in Japan that defines new requirements for fuel consumption. As a result, the cars received even more economical engines. However, at the same time, their working volume was reduced to 8.8 liters, but the power indicators became, on the contrary, higher – from 350 to 360 horsepower. As for fuel consumption, on average, new engines consume up to 24 liters per hundred kilometers.

The main difference between single trucks is their technical specifications. There are several versions in total: FH, FN, FP, FR, FQ, FS, FW, and GN.

Depending on the version, the maximum load capacity of the truck can range from 8800 to 16200 kilograms. The gross weight is also different, ranging from 15,600 to 25,000 kilograms.

It is worth noting that the entire family has only three main modified versions, and everything else is just their variations:

This version is a dump truck using a 6×4 chassis. The power plant of this modification is represented by a powerful six-cylinder diesel engine with a turbocharger, an exhaust gas recirculation system (which ensures compliance with Euro-4 environmental standards), as well as an intercooler, and CommonRail electronic fuel system. With a working volume of 12.9 liters, the power unit used develops a maximum output power of 410 horsepower. On board, there is a dump cargo platform with a volume of 16.5 cubic meters. Its length is 5000 millimeters, its width 2200, and the height of the sides is 1500. The maximum carrying capacity of this model reaches 17500 kilograms;

It is a truck-type tractor. It has an all-metal cabin that can accommodate two people. Also, inside there is a fairly comfortable bed. For this version, a six-cylinder diesel power plant with a displacement of 12.9 liters was chosen. The maximum output power reaches 450 horsepower. Of the equipment, there is a turbocharger, an electronic CommonRail fuel system, an exhaust gas recirculation system, and more. The engine complies with Euro-4 environmental requirements. The truck itself has a 6×4 wheel arrangement and a gross weight of 28,300 kilograms. At the same time, it can pull a semi-trailer with a gross weight of up to 60,000 kilograms;

It is a cargo chassis that can be equipped with a variety of add-ons. It has an all-metal cabin designed for two people. Access to the engine is carried out in the same way as on other trucks of this class, namely by tilting the cab forward. Under the cab is a six-cylinder power plant with a displacement of 12.9 liters and a maximum output of 410 horsepower. In terms of equipment, the engine almost completely copies previous versions. As for the carrying capacity, this modification is able to withstand a load of 22,000 kilograms, and its gross weight is 30,700 kilograms.

Depending on the modification, the technical part of the trucks may also differ.

The manufacturer used a six-cylinder diesel power plant for a piece-type tractor with a displacement of 12.9 liters. This engine has a turbocharging system, CommonRail electronic fuel injection, and an exhaust gas recirculation system. All this gave him a maximum output of 450 horsepower and compliance with environmental standards Euro-3 and Euro-4.

Dump trucks, concrete mixer trucks, and other single trucks are equipped with the same six-cylinder diesel engine with a displacement of 12.9 liters. However, the power is already 410 horsepower. In addition, it uses almost the same equipment as the previous version. The engine also complies with Euro-3 and Euro-4 environmental standards.

Both engines are Hino’s development.

In addition, other motors were previously installed. These were 10.5-liter diesel power plants with a maximum output of 300 horsepower (for single trucks) and 350 (for truck tractors).

The truck tractor with the SS index has a sixteen-speed manual gearbox with synchronizers in all gears, provided by the manufacturer ZF. In addition, this version uses a dry double-plate clutch with a pneumatic booster and hydraulic drive, as well as rear drive axles with a lockable center differential.

The FS version, also known as a dump truck, has a seven-speed manual transmission, in which there are synchronizers in second, third, fourth, fifth, sixth, and seventh gear. Here, a dry single-plate clutch was used, with a pneumatic booster and a hydraulic drive. Also, this gearbox is installed on other versions of single trucks. 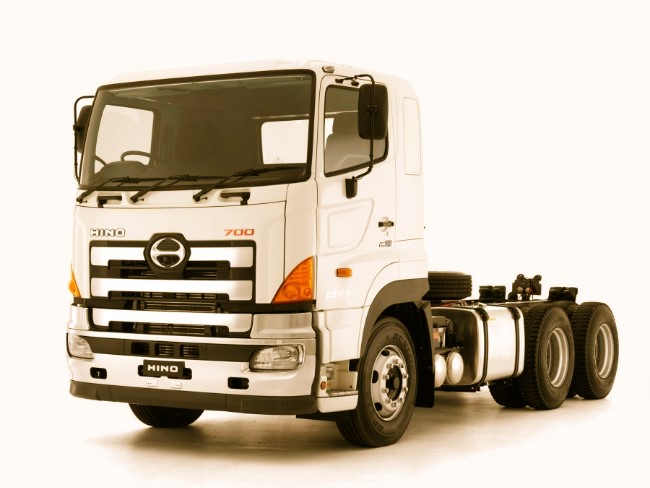 A dual-circuit pneumatic brake system is used in any of the modifications of the Hino 700 truck. In addition, drum brakes are installed on each wheel. There are also ABS and ASR systems, which significantly increase the model’s safety.

All Hino 700 trucks have a riveted frame based on spars with different sections made of high-strength steel.

At the front, the model is equipped with a dependent suspension with semi-elliptical springs, a transverse stabilizer, and a pair of bidirectional hydraulic telescopic shock absorbers.

On the rear bogie, a balancing suspension is used, which, in principle, is also characteristic of other three-axle trucks. Few leaf springs and shock absorbers are installed here.