The Korean corporation Hyundai is one of the leaders in the production of construction equipment. In 1988, the first excavator left the company’s assembly line, which immediately entered the top 20 best machines in its segment. A wide range of models and a variety of modifications make it possible to use Hyundai excavators not only in construction but also in other areas of activity.

Hyundai excavators are widely used due to the following qualities:

All excavators manufactured by Hyundai are divided into two types:

They differ in weight, bucket volume, digging depth, and engine power. And construction vehicles are produced at Hyundai factories, which are located not only in Korea but also in Brazil, China, and even India.

A wide range of models allows you to purchase Hyundai equipment that has certain qualities. You can decide on the choice of model by the name, in which its main characteristics are encrypted. The cipher consists of the following designations:

Most models of Hyundai excavators are equipped with connectors through which attachments are connected, which significantly expands their scope.

A crawler excavator is an earthmoving machine designed to work in off-road conditions. Tracked models have about 100 modifications, distinguished by carrying capacity, dimensions, and digging depth.

The performance of machines is 90% dependent on the quality of the engine. The power units of the American company Cummins and the Japanese corporation Mitsubishi allow it to be provided. At the same time, Hyundai excavators, in the vast majority of cases, are equipped with American engines. This factor is explained by the lower cost of their diagnostics and repair.

Due to the design features, Hyundai crawler excavators have many advantages:

If we compare tracked models of Hyundai excavators with similar models from other manufacturers, we can highlight a number of advantages. Among them is a wide range of modifications weighing from 11 to 50 tons, which allows you to choose equipment to perform any type of work, even in confined spaces.

The increased track width on Hyundai excavators ensures stability, regardless of tonnage, even on the steepest slopes.

Hyundai wheeled excavators are well-deservedly popular, as they are able to work in almost any condition. They are used for loading/unloading bulk and lumpy materials, excavation, and work in quarries.

The enlarged cab provides excellent all-around visibility, allowing the operator to complete tasks quickly and efficiently. A feature of Hyundai wheeled vehicles is maneuverability. They are able to independently reach the object in urban conditions, overcoming long distances.

Hyundai wheel models are equipped with American and Japanese engines of Cummins and Mitsubishi concerns. The mass of machines varies from 4.5 to 20.6 tons. The bucket volume is from 0.07 to 1.3 m³, and the maximum digging depth is 4.8–6.3 meters. Additional convenience is provided by a computer system for managing and controlling the nodes.

All wheel excavators manufactured by Hyundai can be equipped with additional attachments, such as a hole drill, hydraulic hammer, leveling bucket, or trencher. Thanks to them, machines are able to turn into multifunctional devices capable of performing a wide variety of tasks.

To evaluate the variety of modifications of Hyundai earthmoving equipment and make a choice, you need to familiarize yourself with the characteristics of the models. Among them, you can find both tracked and wheeled excavators.

The excavator of this model is powered by a Cummins four-cylinder engine with a power of 86 kW. Its main advantages are:

The comfortable operator’s cab is equipped with a heating and air conditioning system, as well as a radio and LCD display. Rationally located indicators and sensors greatly facilitate the work of the driver.

The weight of the excavator is 13.6 tons. And such a car moves at speed not exceeding 30 km / h. Digging of pits is possible to a depth of 4.21 meters.

This technique is able to withstand significant mechanical loads due to the all-welded frame made of high-strength grades of steel. For the Hyundai R180W-9S model, engines with economical fuel consumption are purchased from the Japanese concern Mitsubishi.

The mass of the excavator is about 18.42 tons, and the engine power is 94 kW. The maximum speed of movement of equipment is 30 km / h. The fuel tank holds 270 liters, which is enough for 27 hours of operation.

This crawler excavator is highly maneuverable thanks to its low weight of 18.6 tons. With a small mass, it is capable of digging deep pits (up to 6 meters) and unloading soil to a considerable height, covering an area at a distance of 7.7 meters.

The equipment is equipped with a Mitsubishi diesel engine and a bucket with a capacity of 0.76 m³, as well as direct fuel injection. The turbocharged engine is air-cooled. And the cold start system allows you to start the engine at moderate temperatures without operator intervention.

The Hyundai R180LC-9S excavator is a machine that has a minimal impact on the environment. The manufacturer managed to achieve this by installing a catalyst in the exhaust system.

Like any other tracked equipment, this excavator is characterized by a low speed of movement, not exceeding 5.5 km / h. But it will become indispensable in quarrying, thanks to its ability to overcome slopes up to 35 °. 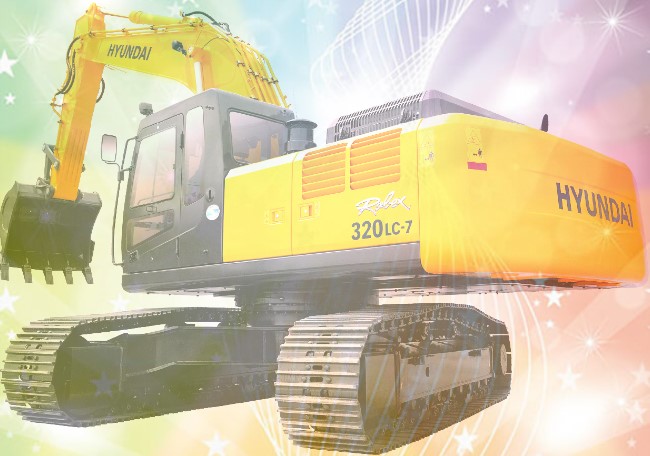 Hyundai produces several models of excavators weighing 20 tons. All of them differ in modifications and design features. But it is R210LC-7 that is most in demand in the construction industry.

At the heart of the 23.7-ton machine is a 112 kW Cummins engine. In most cases, this excavator model is equipped with a bucket with a capacity of 1.4 m³. But in some trim levels, it has been replaced by smaller models.

The machine moves at a speed of no more than 5.5 km / h, digging to a depth of 6.55 meters and unloading soil to a height of 6.9 meters. But the radius of excavation is as much as 10 meters.

The excavator’s work is controlled by a computer system for controlling the power of the engine and the central console. In the cold season, the pre-heating function will be very useful. In the future, the engine can be started by using the cold start system.

This excavator is capable of operating at air temperatures below 40°C. Due to the extended shoes, the tracks do not exert significant pressure on the ground. Therefore, this model is applicable to low-density soils.

This machine is powered by a six-cylinder diesel engine with a 128 kW turbine. The hydraulic system is equipped with two pumps with a brake valve, with the help of which it is supplied.

The Hyundai R250LC-7 excavator is capable of carrying out earthworks within a radius of 10.4 meters, digging pits and trenches 7 meters deep, and unloading soil to a height of 6.7 meters.

The operator, being in the excavator cab, is able to view the object in all possible directions, which increases the efficiency and speed of work. There is no need to stop them even at night, as two powerful headlights perfectly illuminate the working surface.

Hyundai excavators are equipped with a convenient control system that includes a pair of joysticks, the same number of levers, and pedals. All of them are located in the access zone. The cab has an ergonomic seat that the operator can adjust based on height and dimensions.