Kenworth T680 is a tractor from the USA, presented in 2012, and has gained wide popularity worldwide. Its features include maximum comfort in the cab, ergonomics, and unique technical features that allow you to cope with any task.

Kenworth T680 is another product of the well-known American company Kenworth Motor Truck, founded in 1923 as a joint stock company by two entrepreneurs, E. Worthington and G. Kent.

Before the advent of the Kenworth T680, many well-known tractors were created and discontinued. Among them are the T 2000 with a modern interior and improved sound insulation and cars of the 700 series, which were produced in the 2000s.

In 2012, at an exhibition in the United States, a new car was presented, presented as a new type of tractor. It was presented as the flagship among the American Kenworth tractors, which combined all the currently available developments. Engineers have implemented many modern systems, improved handling, and fuel economy.

The Kenworth T680 truck has been developed over five years to create a quality truck with a charismatic appearance, a streamlined cab, and elegance in every element. In appearance, we can say that the American truck was created in the best traditions.

The truck has been produced since 2012, but in 2017, there were significant changes in the technical part, the comfort level, and the car’s safety. The developers preferred Paccar MX engines, and a system for reducing “gluttony” appeared, allowing saving on transportation. It is easy to confuse the cab of a tractor with a living room, where you can not only travel but also have a good rest.

The Kenworth T680 has a very soft suspension, a powerful engine, and an automatic suspension. The machine has a turbocharger with the ability to adjust the parameter, an air compressor, and a well-thought-out lubrication system. Thanks to the cab’s aerodynamics, the truck’s creators managed to reduce fuel consumption by 6% compared to the previous version.

The interior has been completely redesigned to look more like an apartment than a truck cab. The size of the gas tank has increased. A 15-inch display appeared on the dashboard, informing the driver about speed, engine speed, and other parameters. Added LED headlights with IR heaters.

For independent work, it is enough to have a set of “inch” keys, which are sold in special outlets and services in the United States. A standard adjustable wrench is useful for changing wheels.

All in all, the Kenworth T 680 is a long-haul haul tractor capable of covering long distances and providing the driver with a comfortable seating area. The machine is specially designed to deliver goods to any distance within one or more countries without the slightest discomfort.

The main advantage of the truck lies in the unique technical characteristics that make it possible to consider the Kenworth T680 one of the best mainline tractors today.

Initially, the Kenworth T680 tractor was equipped with a Cummins ISX15 engine, which produces up to 485 horsepower. The engine uses the principle of recirculation of cooled gases without increasing the number of harmful emissions. When creating the motor, the developers provided an upper cam system that provides the power unit with excellent performance, efficiency, and the ability to “brake” the engine.

The main parameters of the motor include a volume of 14.9 liters, a compression ratio of 17 to 1, a 14-centimeter cylinder diameter, and a 16.5-centimeter piston stroke. The maximum torque is 2237 Nm, and the total weight is 1.46 tons. This motor was installed not only on the T680 but also on other trucks and other equipment.

Since 2017, the developers have switched to the Paccar MX-13 with a volume of 12.9 liters and a power of 405 to 510 horsepower. In addition, an optional MX-11 version of 10.8 liters and 430 horsepower is available. At the same time, updated cruise control was connected, which works in parallel with GPS satellites and provides real fuel savings due to the correct choice of operating mode. 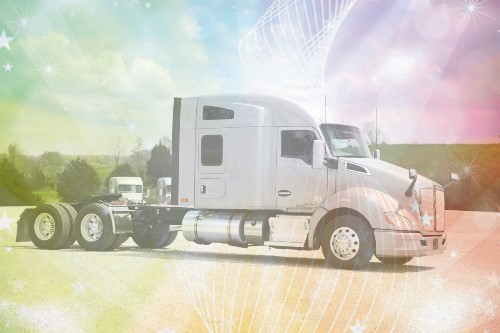 The MX-11 version has a dedicated fan clutch that optimizes the power unit’s performance and helps adapt the cooling system to different operating conditions. In parallel, faster warm-up and efficient conditioning of the airflow is provided.