The Mercedes-Benz Unimog is called a “truck-tractor hybrid”. Most of the cars in this family are universal chassis that is suitable for installing cargo and passenger bodies, all kinds of special equipment, motor homes, and much more.

The ability to install attachments allows you to turn the truck into a bulldozer, excavator, potato harvester, and so on. Mercedes-Benz Unimog is used in public utilities in various extreme situations. They serve as a base for the installation of equipment for fire and emergency vehicles and even travel on railway tracks.

The first all-terrain vehicles of the Mercedes-Benz Unimog brand were developed at the end of the Second World War. By the way, the original name of the machine was “tractor” – “Allzwecktraktor” (“Universal Tractor”). They have been in serial production since 1949. And in 1951, the Unimog brand, from the German Universalmotorgerät, became part of the Daimler-Benz concern. And Unimogs have also become Mercedes.

Mercedes-Benz Unimog of the first, four hundredth series worked as universal helpers at construction sites, cleaning, agriculture, fire fighting, and repairing power lines and railways. Of course, the truly massive use of trucks of this brand has always been hindered by their very high price. But where exceptional properties were required – cross-country ability, reliability, and power, the Mercedes-Benz Unimog firmly took its place.

Since 1955, these cars have been accepted into the German army (Bundeswehr). A great success was the Unimog S 404 model – a truck designed specifically for military needs. An extended wheelbase of 2900 mm provided it with convenient transportation of people and goods, a ground clearance of 400 mm guaranteed excellent cross-country ability, and a 2.2-liter gasoline engine with a double carburetor produced 82 hp. This army truck was supplied to the armament of the countries of Germany, France, and other European countries.

By 1963, Unimog had already firmly established itself not only in the army, but also in the public services of the most developed European countries. The new Unimog U 406, with 4-side attachments, was equipped with a more powerful 110-horsepower six-cylinder engine. The model range of Mercedes all-terrain vehicles was expanded. Unimog U34, U40, U70, U80, as well as Unimog S, designed specifically for civilian use, began to leave the conveyors. 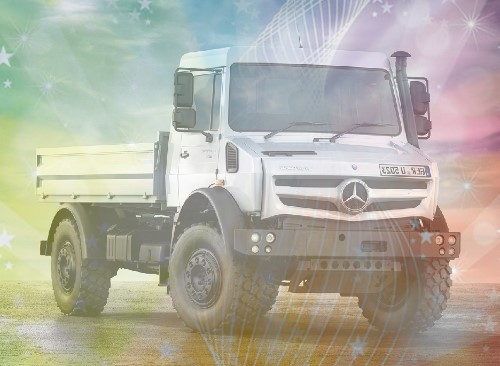 In 1974, the “heavy” 425th series began to be produced, with a wheelbase extended to 2810 mm and an engine with a capacity of up to 125 horsepower, with a load capacity of up to nine tons (U1300, U125). A few years later, Mercedes-Benz Unimog received an updated design with an enlarged cab, which has survived to this day. This angular design, with powerful wheels and a minimum of decorative elements, is pure functionalism.

On the chassis of the Mercedes-Benz Unimog, Dingo armored personnel carriers are manufactured, which are in service with the armies of various NATO countries. In Western Europe, Mercedes-Benz Unimog vehicles are commonly used as snow plows, municipal cleaning vehicles for both summer and winter applications, agricultural trucks, construction equipment (cranes, drills, work baskets, manipulators, platforms), and locomotives (mobile engines predominantly for agricultural purposes).