Mercedes Benz Zetros is a time-tested, reliable, and productive truck that can work in difficult operating conditions and overcome almost any obstacle. First introduced in 2008 and still in demand.

The model is distinguished by the convenient location of the engine, all-terrain qualities, and powerful traction.

The developer of the Zetros truck is the German company Mercedes Benz. The car replaced the outdated version of the S2000, produced in 2002 in Hungary. The first presentation took place in 2008. At the same time, the car was presented in Paris at an exhibition of military equipment and an international motor show.

In 2009, the developers added an automatic transmission and released a civilian version. During its production, Zetros has been constantly refined and improved. At the same time, several main models were released on the market:

By the way, the latest version appeared in 2017, and there were no new models after it.

One of the key advantages of the Mercedes-Benz Zetros truck is its wide range of applications. It is used in the following areas: 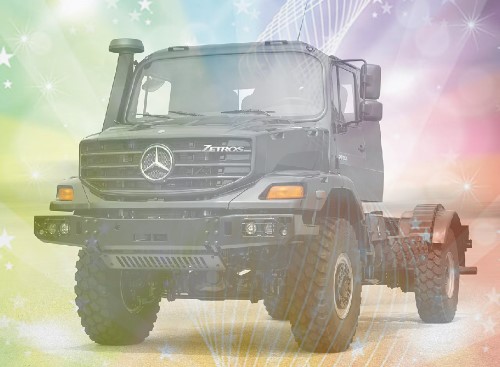 Also, the machine is used in the oil production field for transporting passengers and dangerous goods, when performing drilling operations, as a tow truck, a mobile generator – all of its capabilities cannot be listed.