Hino Motors, Ltd. – One of the largest truck and bus manufacturers in Japan, since the 1960s it has been a division of Toyota Corporation.

Hino manufactures a wide range of diesel buses and trucks for various purposes.

After the end of World War II, Hino Heavy Industry ceased the production of large diesels for marine vessels, and removed the word “Heavy” from its name. The company concentrated its efforts on the production of trucks, buses and diesel engines. In 1948, the company added the word “Diesel” in its name, and became known as Hino Diesel Industry Co., Ltd.

In 1953, Hino acquired licenses of the French company Renault, and in 1961 began production of the Contessa 900 with an engine capacity of 893 cm³. In 1964, the Italian stylist Giovanni Michelotti upgraded the car, and it began to be produced with a 1.3 liter engine.

The Hino company developed rapidly, and in 1967 became part of the Toyota Corporation.

Melpha 7 is a small 7-meter bus, which is offered in 7 variants, with a capacity of 23-29 people and a total weight of 7.6-7.9 tons. It uses a 4-cylinder 5.3-liter turbocharged engine with a capacity of 175 liters. with., automatic 3-speed gearbox and front disc brakes.

Liesse – a series of small buses of the widest destination. The tourist version of the Liesse for 20-29 passengers is practically the same as the Melpha model, but it has an overall width of only 2025 mm and is completed with mechanical 5- and 6-speed transmissions. The Liesse II version is a lightweight, multifunctional vehicle of classic design with a length of only 6230 mm and a gross weight of about 5 tons. On numerous versions of this series, 4- and 6-cylinder front engines with 130, 170 or 190 hp, 5 and 6-speed gearbox, side sliding doors. There is an option with all-wheel drive with a 12-speed transmission.

The gamma consists of medium-sized buses with a length of up to 9 m and a total weight of 9.8–11.6 tons. It is headed by the universal model Melpha 9 for 34–47 seats, equipped with 6-cylinder engines of 220 and 260 hp, with the most A powerful engine with a displacement of 7961 cm³ is equipped with a turbocharger. For the first time, the Selega FC tourist bus with 37-47 seats with a 260-horsepower engine and a 6-speed manual appears in this range. It also presents the “light” city 2-door Rainbow bus with a total weight of 10.4–11.0 tons, offered in 5 variants with a total capacity of up to 60 people (22-25 seats). 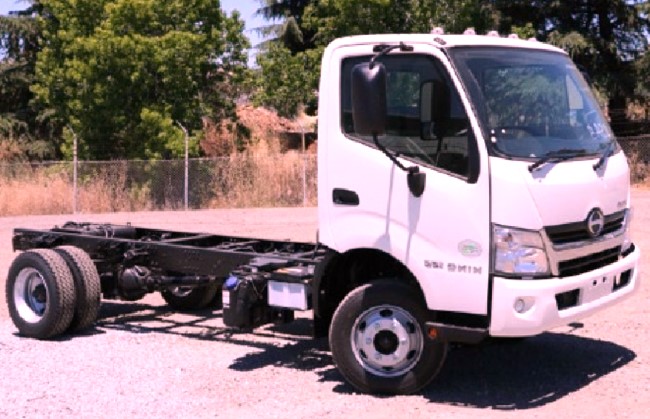 The urban series consists of Blue Ribbon low-frame buses, 9.5–11.1 m long and 13.7–15.2 tons gross weight with various cabin layouts. Some of them are adapted for local and long-distance transport. Their total capacity is in the range of 66–95 people, including seating from 23 to 51. On the basic RU, HT and HU series, rear-mounted 6-cylinder engines with a displacement of 7961, 9880 and 13 267 cm³, develop a power of 215, 230 and 270 hp, the usual 5-speed gearbox and air suspension. Since 2000, the urban version of the HU has used a rare for Japan 250-strong diesel with a working volume of 10,520 cm³, equipped with a turbocharger with intermediate cooling. The tourist 12-meter series Selega with a total mass of 15.5–16.0 tons also has several modifications. The most simple range of Selega FS / FD with a capacity of up to 57 passengers, which also performs long-distance transportation, is equipped with two types of V8 diesel engines with a displacement of 19,688 and 20,781 cm³ without a boost with a capacity of 365 and 430 hp. respectively. Tourist buses Selega RFD, RGJ and RGD with a raised cabin with 57 seats are equipped with a new V8 diesel engine (16,745 cm³, 450 hp).

NTEA Truck Show in Indianapolis, Japan’s Hino Motors Ltd. introduced a new line of lightweight cabover trucks. Class 4 in the US will be serviced by Hino’s 155 diesel model and the 155h, the first hybrid truck in America.

The president of Hino Trucks, Sumio Fukaya, said that the new cabover range was a fantastic addition to the Hino brand in their pursuit to provide clients with the ideal answer to their demands. Furthermore, with the new lineup, “Hino Trucks is also offering diesel-electric trucks for the US market.”

The new line of trucks is powered by the tried-and-true 5-liter Hino J05E series engine, which produces 210 horsepower and 597 Newton-meters of torque. The gearbox is an Aisin A465 6-speed automatic.

It’s typical for all models to have a large, airy cab and a standard gas tank. Elegant cabs provide unobstructed views thanks to a steeply slanted windscreen and tiny A-pillars. There are three seats in the cabin’s single row. You may also choose between a regular taxi and a cab with two rows of seats.