The Mercedes-Benz Arocs dump truck is a vehicle with increased endurance capable of performing tasks in difficult operating conditions. The main features include a strong cab frame, a high level of safety, a long service life, and an economic engine. If necessary, the truck is completed taking into account the preferences of the client, the possibility of changing the configuration, and a set of accessories.

Mercedes-Benz Arocs trucks from the German brand were first introduced in early 2013. At the same time, the official debut was organized a little later – in the period April 15-21 of the same year in Munich. The car came to replace the Actros model, which has been produced since 1996 and during the release showed its best side. At the same time, we note that many Actros models are made today. We are talking about trucks of the second generation, which appeared in 2011.

At the same time, the lineup included concrete mixers, dump trucks, and tractors with a different number of axles and engines in 16 different versions – from 238 to 625 horsepower.

Transport was presented by several models, namely Arocs Leader and Arocs Grounder, which are characterized by increased carrying capacity. A separate group includes the Arocs SLT machine, designed to work as part of a road train.

The main purpose is to work on construction sites. They can be used when laying road surfaces, erecting structures, dismantling various objects, removing garbage, etc. Depending on the potential load and the complexity of the work performed, vehicles with different engine power and carrying capacity are used.

Also, depending on the type, Arocs trucks can be used as the following vehicles:

At the same time, Mercedes-Benz Arocs dump trucks can also be used in other areas – municipal, mining, agricultural, etc. Transport easily copes with increased loads and passes on roads with poor coverage. At the same time, the technique itself is distinguished by an increased level of mobility. 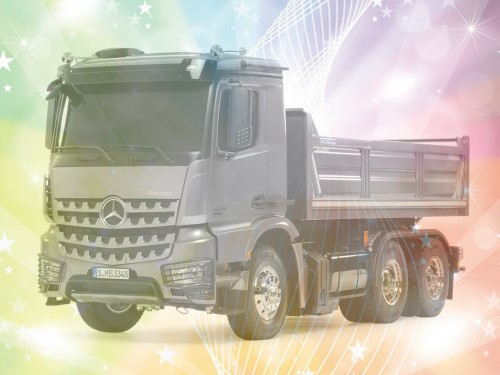 Trucks are available with two to four axles. On sale, there is transport with the following drive options: 4×2, 8×2, 8×8, and others.

Plug-in all-wheel drive – suitable for complex operations when working on rough terrain. It has a 4×4 drive, as well as a reduced speed to overcome difficult areas.

A big plus is a large selection of cabins, which are presented in three versions. They are short, medium, and long. Let’s take a quick look at their features:

There are also 6×4 with a lowered cab.

In general, the following variants of the Mercedes-Benz Arocs are on the market:

Other models can be found on sale, for example, the Mercedes Benz Arocs 3245K with an 8×4 chassis and an engine that meets Euro-6 requirements.