Daewoo Heavy Industries & Machinery (DHIM) with truly eastern equanimity, without losing dignity, overcame the protracted economic stagnation, which comprehended the 1997 crisis of the country of Southeast Asia, including Korea. In any case, the merger of Daewoo with the Doosan Group is not an act of despair, like the bankrupt division of cars Daewoo (now Chevrolet), but a conscious, balanced step aimed at the active development of the company and further expansion to foreign markets, where the DHIM technique is good She showed and found more and more supporters. In the first stage, it will be supplied under the joint brand of Daewoo-Doosan with the prospect of replacing the Doosan.

The family of track excavators Daewoo Solar, which will be discussed, has already celebrated a half-century anniversary, and today the fifth generation is coming off the assembly line. As if in confirmation of the name Solar, the company stains its cars in bright orange. The plant in Belgium produces four models weighing from 13 to 25 tons, including two with an elongated arrow and one specialized one to destroy with three-section working equipment, a lifting cab, and additional hydraulics. The remaining models of excavators and loaders are produced by a plant in Korea. Excavators are made in a “classic” layout: a full-sized full-range platform, a transverse engine, radiators on the left side and a pump compartment on the right, an X-shaped caterpillar trigger with a hydraulic drive of the rear drive wheels, and a cabin forward, beyond the support of the arrow.

For the entire lineup, three-line six-cylinder diesel engines of their own products are used, which meet the requirements of current environmental standards EPA Tier 2 and EU Stage 2. Models weighing 13 to 26 tons (SOLAR 140LC-V … 255LC-V) are equipped with a diesel DHI DB58TIS. 5.785 liters with various intercooler performances.

Depending on the model, the cooling system of boiler air, either with liquid or air, is used. On the rest, more powerful and heavy models, an intercooler with air cooling is installed. On the 30-ton Solar 300LC-V and its modifications (with an elongated arrow and for destruction), they put the DE08TIS diesel 8.071 liters, on the “senior” models (SOLAR 340LC-V … 500LC-V)-DE12TIS with a volume of 11.051 liters.

The E-EPOS electronic system (Electronic Power Optimizing System) connects the engine, hydraulic system, and controls. The electronic control of control, placed under the seat of the operator, is easily removed if the four bolts are unscrewed. A very attractive feature of SOLAR excavators is the complete preservation of functionality when the electronics fail. The excavator will continue to work as before the era of computerization, although its performance and efficiency will decrease. In addition, the engine speed regulator is duplicated by the cable installed in the cab. 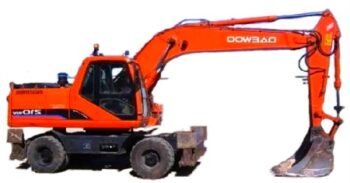 The conditions for simple and safe daily and periodic services are thought out. In order to prevent injuries, the fan was taken with a circular grate, and a thermal screen was installed on the turbocharger. Daily service points are easily accessible: under the engine hood – an oil probe, next to the hood – a hydraulic tank bath, which must be unscrewed to level pressure at the end of the shift. Here, on the platform at the arrow’s arrow, the probe is checked by the oil level in the rotary gearbox. The fuel level sensor is duplicated by a measured tube. The gap between the oil radiator and the cooling system radiator for the convenience of cleaning them is increased. The lubrication points of the arrows and handle hinges are grouped and displayed to the support, although the centralized lubrication system would be more appropriate, especially on senior models.

The fuel system includes a transparent filter separator. The presence of water in it can be judged by lifting the red ring. But it is better not to wait for this, but drain the fuel tank daily so that condensation does not form in it at night.

To change the oil in the engine, you do not need to turn off any plugs – the oil is drained through an easily accessible valve with a tap and a removable hose. Data on maintenance is entered into the E-EPOS system, which tracks the next service.