As the analysis of the structure of the global market for construction equipment shows, wheeled loaders steadily occupy second place, second only to hydraulic excavators. The popularity of wheel loaders is explained by many factors, the main of which are:

It should be noted that the loader Daewoo MEGA 160TC and the Daewoo Mega 200-VTC can be equipped with fork equipment for working with piece loads.

According to the structure of the typical row, Daewoo loaders can be attributed to the middle category of machines for this purpose, which is intended mainly for loading work in civil, industrial, and road construction, as well as in the industry related to the prey of building materials, and in the public utility…

Daewoo MEGA 400-V and Daewoo MEGA 500-V models can be used in the mining industry for the cleaning operations of diseases and rock transshipment.

Daewoo loaders have many decisions adopted on modern loaders. These design solutions reflect the modern world’s technical level. Of the main such solutions, it should be noted:

Concerning the loaders of this company, it is necessary to note the use of a number of components of foreign production units – the Cummins QSM 11 diesel engine on the MEGA 500 -V model loader, transmission nodes (gearboxes, gearbox, leading bridges) of the German company ZF for all models. 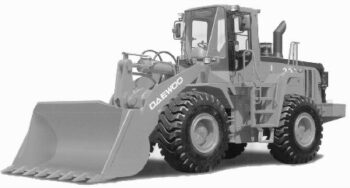 Considering this series of loaders, it should be noted that its construction has sufficient harmony, characterized by the transition coefficient from one model to the neighboring mass from 1.23 to 1.35 at an average value of 1.28, and in power from 1.11 to 1.44 at an average value, also 1.28. Thus, a typical series of loaders is characterized by a proportional increase in the mass to power, having some imbalances inherent in the MEGA 400-V and MEGA 500-V models when the growth of energy for the MEGA 400-V loader is ahead of the evolution of its mass (when compared with the MEGA 300 model, -V), and in the MEGA 500-V loader, the development of mass is ahead of the growth of power (when compared with the MEGA 400-V model).