In 2006, the CF family updated similarly to the LF series. 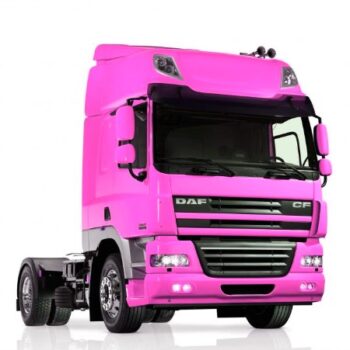 In 2013, the CF family was updated similarly to LF and XF series. The cars received a new appearance and engines of Euro-6 standard.

For CFs of the CF series EURO 6, a highway of up to 44 tons with a rotating engine of the engine up to 2300 nm, a new, even lighter rear axle appeared. The use of Stabilink design is one of the innovations. Built-in, the rear axle suspension stabilizer of the transverse stability provides optimal rigidity and stability and also can significantly reduce the mass. The new mounting plate of the seat-connecting device, the thoughtful mounting of the compartments of the batteries, and the new steering system also allow reducing the mass. The design of the LF Euro 6 line chassis was fully revised to ensure maximum rigidity, excellent running qualities, additional free space for fastening components, and reducing its own mass.

In April 2017, DAF showed a new generation of CF (4th), which, although it looks like the previous one, became 7% more economical. Paccar Mx engines received an updated turbocharged and changed EGR system. Thanks to the new pistons and nozzles, the thermal load on the engine was reduced. A number of technical improvements made it possible to significantly increase the torque of the Paccar MX-11 and MX-13 engines.

The rear axle was also refined. The transmission number of the main gear was reduced to 2.05: 1, which allowed reaching the cruising speed of 85 km/h at 1000-1040 rpm. In the DAF CF standard, the 2017 model year is equipped with a 12-speed automated Traxon gearbox, and a 16-speed is available as an option. New trucks also received updated electronics with Ecorolll and Cruise Control of the last generation. In addition, Paccar Engine Brake’s motor brake output has been increased. The maximum brake power in the MX-11 engine increased from 320 to 340 kW, which gave 20% increased braking efficiency in the speed range from 1000 to 1500 rpm.