Trucks built by GINAF (Ginkels Automobiel Fabriek) of the Netherlands. Heavy four-wheel drive trucks with drive types up to 108 are the company’s top product.

After World War II, Ederveen native Evert van Ginkel started constructing tippers and modifying Ford A models into agricultural tractors at the business he had opened in 1933. In order to carry on their father’s automobile company, Adrie and Wulfert van Ginkel established a general partnership on November 1, 1948. Most of the vehicles they sold in the ’50s were Reo Motor Car Company relics from the military. The original version of these was available from the outset. Diesel engines from the British company Leyland were installed in them, just as they had been in the DAF trucks. Evert-Jan van Ginkel, Evert’s third son, started working for the family business in 1959. Ginkel bought a lot of used military dump trucks from the US that had been deactivated the same year. These cars or their components were used to create new vehicles, and the customer was given the option of which engine brand to install. At the time, DAF motors were the standard.

The GINAF firm, which began making trucks in 1967, now produces around 150 vehicles annually. This was the beginning of the GINAF brand’s dominance in the auto industry. Close collaboration with DAF, which utilizes cabs, for example, and for whom GINAF does conversion work on DAF trucks, dates back to the 1970s. DAF agreed to take over GINAF’s sales and servicing operations in 1982.

GINAF’s model lineup grew in 2006 to include heavy-duty dump trucks with as many as five axles and a gross vehicle weight of up to 50 tons, legal for use on Dutch roads or as much as 95 tons, suitable for use in open-pit mines. Upon GINAF’s bankruptcy in 2011, China Hi-Tech Group Corporation (CHTC), a state-owned Chinese corporation, acquired the company. With the addition of fully electric trucks that can haul up to 24 tons in 2013, the product line increased significantly. Through a management buyout in 2020, GINAF was separated from China Hi-Tech Group Corporation and had been functioning independently since then.

Since 1987, individual drivers like Jan de Rooy and Gerard de Rooy, as well as private teams like the Ginaf Rally Power Team, have employed GINAF trucks to compete in the Dakar Rally, the Africa Eco Race, and the Baja Germany. Rally trucks, known as the FAV 3600 4×4, were produced by GINAF until 1988 for DAF. On the Dakar Rally in 1994, a four-wheel-drive FAV 3600 placed fourth in the truck category.

A FAV 3600 4×4 finished in fifth position in the 1996 Master Rally Paris–Moscow–Beijing, an event that paved the way for the Silk Way Rally. Since the turn of the century, GINAF trucks have consistently finished in the top 10 in their class at the Dakar Rally. 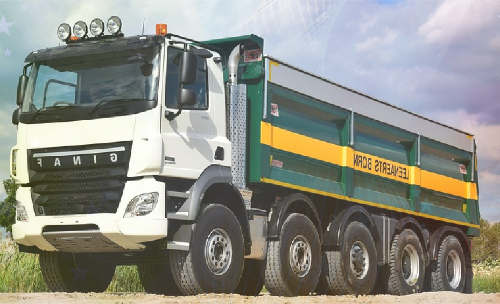