Doosan Moxi is a rather young brand, although separately these two words have been heard for the two words. The Norwegian company MOXY has been specializing in the production of hinged-combined dump trucks for more than 30 years. In the fall of 2008, it was acquired by the South Korean Transnational Corporation of DOOSAN, which, in particular, includes such well-known brands as Bobcat (USA) and Yantai (China).
Today, the Gamma of Norwegian-Korean career dump trucks has five basic models with a carrying capacity of 23 to 46 tons. The Moxy MT41 broke through the Russian market and is designed to transport bulk cargoes weighing up to 37.2 tons.

Why was the customer a choice in favor of this particular model to work on Yamal? This is mainly due to the conditions in which the dump trucks have to work. And these conditions are very stringent: an almost complete absence of roads, swampy in the summer, and in winter -a heavily snowy area, a large dustiness of air, the temperature of which in the cold season is often dropped below -40. The removal of the front of work from maintenance bases also introduces its nuances. Only reliable, unpretentious and robust dump trucks can overcome such difficulties. It is better if they are made according to a particular articulated scheme, which provides them with cross-country ability at the level of caterpillar machines. In addition to the Doosan Moxy, several manufacturers offer such equipment: Astra, Bell, Caterpillar, JCB, Komatsu, Terex, and Volvo. But the decisive role in the choice of Moxy MT41 played a favorable price/quality ratio, optimal technical characteristics, as well as several design features inherent in this machine.

The hinge-combined design allows the Moxy MT41 dump truck to move around the crossed terrain practically without tearing off the wheels from the ground this is a paramount quality to increase patency. In addition, such a scheme allows the use of a simplified suspension, which significantly increases the reliability of technology when working in conditions of complete off-road, as well as tires of the widest profile that reduce pressure on the soil. It is also important that the hinged-combined dump trucks are characterized by a low center of gravity, which again expands their operational capabilities. Finally, such machines are better controlled in a swamp or deep snow than cars with a classic hard frame.

The front axle of the John’s articulated Moxy dump truck will not be disconnected from the transmission, unlike analogs of other manufacturers, for example, Volvo hinged-monitoring models. At the same time, he does not have a handout, the functions of which are assigned to a 6-band hydromechanical KP with manual control. DOOSAN MOXI specialists assure that such a design of the dump truck transmission positively affects its reliability. 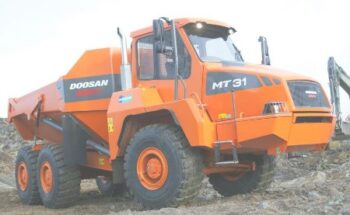 The cross-country ability of the machine on viscous and slightly carrying soils is increased due to the installation of center differentials with the possibility of 45 percent blocking and a fully blocked central differential. The front independent suspension used rubber elastic elements and hydraulic shock absorbers. The rear suspension is a hinge crankcase of a double drive.

Since the moving multi-ton dump truck is tough to stop, especially when it goes under the hill, the main brake system MOXY MT41 is supplemented by an automatic hydraulic brake-macedler and an exhaust thrust system using a throttle exhaust.

Under the hood of the articulated dump truck, MOXY MT41 installed a SCANIA DS12 turbodiesel, developing 450 hp. This is quite enough for a three-legged dump truck- an invariant with a total weight of 64.9 tons- to move at a maximum speed of 53 km/h. Moreover, the geometric capacity of his body, equipped with a heating system with exhaust gases, is 18.6 “cubes”, and when filled with a “hat”, this value increases by another quarter.
Moxy MT41 single cabin, set without lateral displacement, is characterized by a high level of comfort. Shock-absorbing rubber pillows reduce vibrations, and the driver’s adjustable seat is equipped with air suspension. The steering column is also made adjustable. A heater and air conditioning are responsible for the microclimate in the cabin.

It should be noted that, unlike a significant part of its competitors, the specialists of the Doosan Moxi company did not develop their aggregate base for their articulated-combined dump trucks. Instead, they ordered the most important nodes and units of the chassis from third-party suppliers, the main of which was ZF. The automatic box, bridges, and onboard gearboxes of Moxy MT41 are precisely its production. The engine, as mentioned above, supplies Scania. Thus, thanks to cooperation with famous world manufacturers of auto components, Doosan Moxi managed to create one of the most worthy off-road dump trucks in our country.