Dodge Ram Truck is one of the best American pickups with a large carrying capacity produced by the Fiat Chrysler Automobiles concern, and since 2011, allocated to the individual Dodge brand. It differs with a reliable suspension, the presence of rear or all -wheel drive, and good all -terrain qualities.

The Dodge Ram car was originally positioned as a truck for American farmers and entrepreneurs. At first, such cars were not popular among ordinary people, but by the end of the 80s they gained immense popularity in the United States and all over the world. The scope of the use of such machines is huge.

It has been produced since 1981 and is still in good demand. Popular models include 1500, 2500, 3500, 4500 and 5500. Below, we briefly consider the features of the machine, its technical characteristics and capabilities.

The history of Dodge Ram began in 1981. The first models were designated as “D” and “W” and had a rear or four -wheel drive, respectively. Options were installed from the engines by 3.7, 5.2 and 5.9 liters. In 1986, a body was changed, and in 1988 a series of engines was updated. In particular, the 3.9-liter Chrysler unit with electronic injection became popular.

Since 1994, a 2nd generation car has been produced, in which almost all elements have changed, starting with external design, ending with a technical “filling”. As a result, Dodge Ram became more in dimensions and received his individual style. 2nd generation machines were equipped with power units at 3.9, 5.2, 5.9 or 8.0 liters. 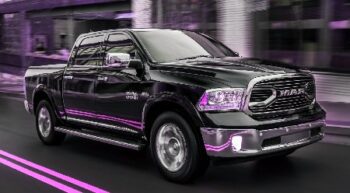 From 2002 to 2008, 3rd generation cars were produced in the rear-wheel drive or all-wheel drive version. Of the engines, the most popular were gasoline engines on 4.7 and 5.7 liters, as well as the diesel engine of Cummins at 5.9 liters. The body was produced in several modifications in length from 197 to 243 cm.

Since January 2008, 4th generation cars have appeared on sale. They are better adapted to daily use, have a more reliable suspension, a stylish interior of the salon.

In 2012, Dodge Ram 1500 was presented in New York with a new design inside and outside, improved aerodynamics, an expanded line of engines and an 8-speed automatic box. Since 2018, pickups of the 5th generation generation have been produced.